Cancer associated retinopathy (CAR) is a member of a spectrum of disease called autoimmune retinopathy. It was first described by Sawyer et al. in 1976 with three cancer patients with blindness caused by diffuse retinal degeneration . In CAR, retinal degeneration occurs in the presence of auto-antibodies that cross react with tumor-tissue and retinal-tissue antigens which are recognized as foreign. In many instances, visual loss from CAR precedes the diagnosis of cancer.

There has been different antibodies isolated against many specific retinal proteins:

There are many more antibodies against different retinal proteins that have not yet been identified.

Keltner et al developed an autoimmune theory in 1983 when he found antibodies against retinal photoreceptors in patient with lymphoma who developed acute vision loss and retinal degeneration. Autoimmunity occurs when tumor antigens trigger an immune response from the host which creates antibodies that cross react with a retinal protein. This leads to cell apoptosis/death and retinal degeneration.

Patients usually present with acute/subacute painless vision loss over few weeks to months with associated positive visual phenomena (such as flashes/photopsia or flickering of lights) and photosensitivity. They are usually bilateral but may by asymmetric and sequential. Patient symptoms depend on which retinal tissue is affected as CAR can cause damage to the rods (causing nyctalopia, constricted visual fields, prolonged dark adaptation, and midperipheral (ring) scotomas) and/or cones (causing photosensitivity, reduced visual acuity, central scotomas, and decreased color perception). Anti-recoverin antibody, which is the most common antibody associated with CAR, usually presents with acute severe vision loss and paracentral or equatorial scotoma. CAR with anti-enolase antibodies causes cone dysfunction typically leading to asymmetric central vision loss with slower progression.

There is no set diagnostic criteria for CAR. The diagnosis is made by a combination of patient's clinical symptoms, exam findings, diagnosis of systematic cancer, and positive antibodies against retinal proteins. Patient's visual symptoms may precede the diagnosis of systematic cancer, making the diagnosis of CAR difficult initially. Other causes of retinal degeneration must be ruled out such as any hereditary or toxic retinal degeneration. In the absence of retinal changes, optic nerve diseases like retrobulbar optic neuropathy, optic neuropathy related to smoking/nutritional deficiency and hereditary optic neuropathy may need to be ruled out. Drug related damage to the optic nerve (carmustine/vincristine and others) or retina (chloroquine/thioridazine and others) also needs to be excluded. 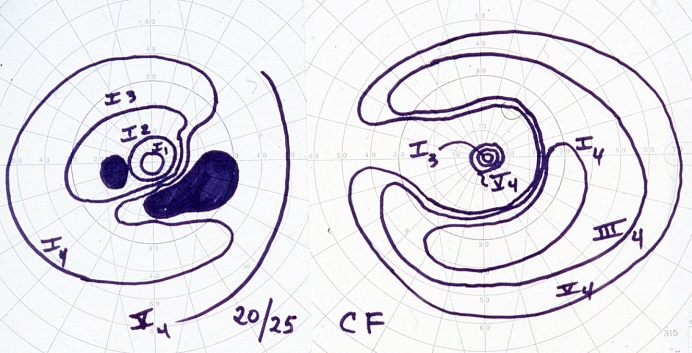 The right fundus of the same CAR patient as above appears normal. 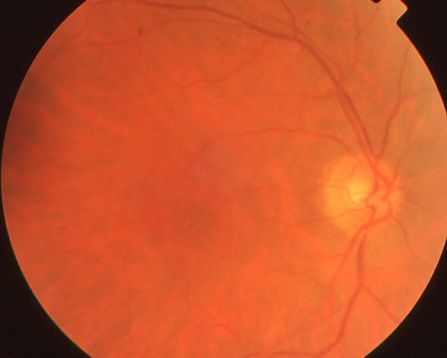 Long term immunosuppression is the main therapy for CAR. Many different systematic immunosuppressive medications (high-dose steroid with methylprednisolone and prednisone, cyclosporin, azathioprine, alemtuzumab), intravenous immunoglobulin, plasmapheresis, and combination of these treatments have been tried with variable results. These treatments may provide mild to moderate transient visual acuity and field improvement, but overall there is no significant long lasting improvement and the visual prognosis remains poor. The treatment of the systematic cancer usually do not lead to improvement of the vision.

If patient with suspected CAR and without any history of malignancy, work up for occult malignancy should be performed including a thorough medical history and physical exam, chest x-ray/contrast enhanced computed tomogram (CECT) of chest, and basic blood work (such as liver enzymes). Additional testing including CECT abdomen, whole body PET scan may be necessary depending on the findings of the initial work up. In females, clinical and imaging evaluation of breast and genitourinary system is critical.