This condition was initially described by Beer in 1817, but the term blepharochalasis was assigned to this entity by Fuchs in 1896. [1] This disorder typically affects the upper eyelids and usually occurs bilaterally, though rare cases of unilateral presentations and lower eyelid involvement have been reported. 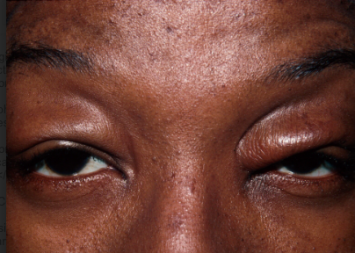 Stages of blepharochasis syndrome including an active intumescent phase during which attacks of non-pitting edema will occur, and a subsequent atrophic, quiescent phase characterized by the absence of attacks for two years and paper-thin, baggy eyelid skin, have been described. [1] [2] Attacks often last two to three days but this is highly variable between patients. The frequency of edema attacks is usually in the range of three to four episodes per year early in the disease course. [2]

Unlike dermatochalasis which may often be confused with this disorder and is an involutional change of the eyelid, blepharochalasis is thought to be a familial variant of angioneurotic edema. While the exact underlying cause is not known, there have been multiple systemic associations described. A link to Asher's syndrome, a rare condition characterized by attacks of upper eyelid and lip edema with or without euthyroid goiter, has been suggested.[1] Other theories suggest hormonal changes especially during puberty, upper respiratory tract infections, and allergies may also play a role in the disease process. 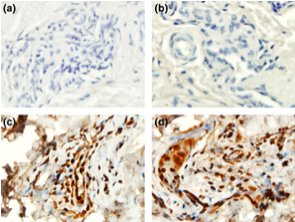 Figure 2: Motegi et al. Immunohistochemistry analysis of eyelid dermis from a patient with blepharochalasis. (a) Negative control IgG staining (b)Absence of MMP-2 staining (c) Staining of MMP-3 and (d) MMP-9 around infiltrating cells in the dermis.

The underlying pathology has not been studied extensively for this disease process. However, several case reports have demonstrated distinct findings in the affected eyelid tissues at the cellular level supporting an underlying immunopathogenic process. Eyelid biopsy in a single patient with blepharochalasis revealed perivascular and interstitial infiltration of lymphocytes in the dermis associated with a marked decrease in elastic fibers. Staining of MMP-3 and MMP-9 was detected in and around infiltrating cells in the dermis. [3] In another study, abundant IgA deposits surrounding atrophic elastic fibers in the eyelid skin of a patient was reported, while these deposits were absent in a control sample of a remote skin biopsy site. [4]

Several theories regarding the pathogenesis and pathophysiology of blepharochalasis have been explored, though none has been confirmed. The episodic eyelid edema which regresses spontaneously may be suggestive of idiopathic angioedema, wherein extravasation of fluid from capillaries causes localized edema. The result is stretched, atrophic tissue. However, perivascular infiltrates which have been reported on histologic examination of eyelid tissue in patients with blepharochalasis may support an alternative or concomitant inflammatory process. [2] Why this inflammation or idiopathic angioedema is confined to the eyelids also remains unknown.

Patients will frequently describe attacks of painless eyelid swelling, sometimes associated with erythema. In most cases, triggers are not identified. Some may report stressful events preceding attacks of edema, or a history of allergy. [1] Other reported triggering factors include crying, bee sting, fever, wind and physical activity. [2]

Blepharochalasis is a clinical diagnosis. In the acute phase, characteristic findings eyelid edema, erythema, and conjunctival injection. A wide variety of physical exam findings may be present and include:[1] 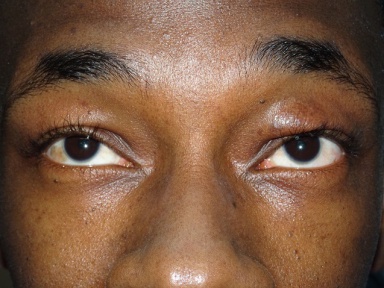 Figure 3: A 26 year old male with blepharochalasis syndrome. Note the asymmetric upper eyelid swelling, greater on the left than the right. The upper eyelid skin is thin and bronze deposits are present on both upper eyelids.

Laboratory studies do not currently play a role in the diagnosis of blepharochalasis syndrome.

There is no established treatment protocol for blepharochalasis. Systemic or topical steroids, antihistamines and other anti-inflammatory agents have not been shown to play a role in acute attacks or in the overall disease course.

Experimental treatments have been reported in the literature. Oral doxycycline, a known inhibitor of matrix metalloproteinases, has been described in a case report of two patients to improve eyelid edema and prevent recurrent attacks. The patients were treated with a dose of 50 mg po bid initially, then tapered to 25 mg po qod. [5] However, there have been no trials to evaluate the safety and efficacy of long term use of doxycycline in blepharochalasis syndrome.

In another case report, oral sustained release acetazolamide at a dose of 250 mg po qd reduced periorbital edema and lid discomfort in a patient who refused surgery and failed treatment with oral corticosteroids. [6] Given the side effect profile of acetazolamide, the drug was discontinued after a short course. 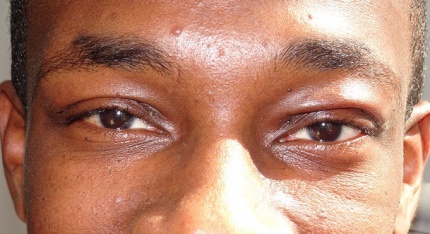 Figure 4: Patient from Figure 3 with blepharochalasis syndrome one week after bilateral upper blepharoplasty.

Surgical interventions are aimed at correcting the complications of blepharochalasis, most commonly ptosis and eyelid skin laxity. Surgical correction should be delayed until late in the disease course when attacks have become infrequent. Disease quiescence for six to twelve months is recommended prior to surgery. [1] [2]

Blepharoplasty, levator aponeurosis dehiscence repair, eyelid tightening, canthal tendon reattachment, and fat grafting may all be considered for these patients. 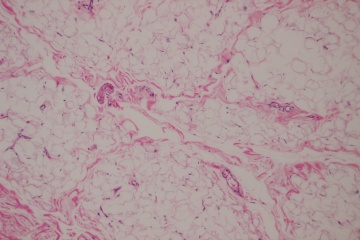 Figure 5: H&E stain of excised eyelid tissue during upper blepharoplasty of the above patient. The normal appearance of the dermis may suggest a state of relative disease quiescence, indicative of ideal timing for surgical intervention.

Unfortunately, the same inflammatory process which results in the blepharochalasis may cause ptosis and eyelid skin laxity to recur after surgical repair. [7] Patients should, therefore, be counseled appropriately.

Ptosis, herniation of the orbital lobe of the lacrimal gland, prominent eyelid vascularity, and orbital fat pad atrophy are all complications which may arise from this condition. [7]

There is insufficient data regarding changes in the frequency of attacks prior to and following surgery. Treatments in the future will likely be aimed at preventing the condition and the complications associated with this disorder ultimately to avoiding the need for surgical correction of these sequelae.