Arteritic Anterior Ischemic Optic Neuropathy (AAION) is an acute, often painful[1] optic neuropathy that occurs predominantly in elderly patients over age 50 but with increasing incidence each decade thereafter[1] and can cause permanent loss of vision. Ischemia occurs at the head of the optic nerve in relation with structural crowding of the nerve fibers, impairing perfusion and leading to optic disc edema.[2] There is thought to be a genetic component to the disease, as evidence shows Caucasians are affected at a higher rate[1], but it has been reported in many different races and ethnicities.

As opposed to the more common non-arteritis variety (NAION), AAION accounts for 5-10% [1] of anterior ischemic optic neuropathies (AION) and is caused by inflammation and subsequent thrombosis of the short posterior ciliary arteries (SPCA’s), which originate from the ophthalmic artery, and results in optic nerve head infarction.[1] The medial SPCA has been reported to be more commonly obstructed.[1] Postmortem studies of acute AAION cases show optic disc edema with necrosis of the prelaminar, laminar and retrolaminar portions of the nerve and chronic inflammatory cell infiltrate. The prelaminar region is located between the lamina cribosa and the surface nerve fiber layer, supplied by centripetal branches of the peripapillary choroid.[1]

Fluorescein angiographic data support the histopathological evidence of involvement of the SPCAs in AAION. Extremely poor or absent filling of the choroid has been depicted as a characteristic of AAION. Optical coherence tomography angiography may also provide clinical evidence in ischemic conditions of the optic nerve head.[3]

Studies have also suggested that dendritic cells residing in the vessel walls are key contributors to the disease. These molecular studies indicate that the dendritic cells may initiate a pathogenic cascade in addition to recruiting macrophages and T-cells. A significant immune response initiated is the “interleukin-6–type 17 helper T-cell (Th17)–interleukin-17 or interleukin-21 axis”, which can be suppressed with glucocorticoids[1] or the recently FDA-approved interleukin-6 inhibitor, Tocilizumab (Actemra).[4]

Manifestations include rapid onset of unilateral visual loss accompanied by decreased visual acuity (typically severe: <20/200 in over 60% of the patients), visual field (altitudinal field defect is most common) or both. A relative afferent pupillary abnormality is common in unilateral or asymmetric optic neuropathies.[5] A chalky-white pallor of the optic disc with edema, which may be severe, is the hallmark of AAION, but it’s not uncommon to see hyperemic swelling as well[1] that may be indistinguishable ophthalmoscopically from NAION. The disc most often is swollen diffusely, but a segment of more prominent involvement may be present with flame hemorrhages located adjacent to the disc, and the peripapillary retinal arterioles frequently are narrowed. Cilioretinal artery occlusion can be more specific for AAION due to the artery deriving its blood supply from the SPCA.[1] In addition, amaurosis fugax is an early sign that AAION may be present and that vision loss may be imminent.[1] Transient visual loss, however, is distinctly unusual in NAION.

The ocular manifestations may be due to vasculitis related ischemia in the optic nerve, retina, choroid, orbit, or brain.

Systemic symptoms of GCA that are typically present include headache (most common) and tenderness of the temporal arteries or scalp, jaw claudication (symptom most specific for the disorder), malaise, loss of appetite, anorexia and weight loss, fever, joint and muscle pain, and ear pain. Choroidal ischemia may be associated with the optic neuropathy and produces peripapillary pallor and edema deep to the retina. The disc of the fellow eye is of normal diameter in AAION, as is the physiologic cup.[5]

Occult GCA without overt systemic symptoms may occur in up to 20% of patients with AAlON. Other presentations, however not reasonably common include hearing loss, vertigo, facial pain, lingual paralysis and carotid bruits.[6]

Patients on exam can often show many different signs to lead to the right diagnosis. Some important signs on exam include seeing the optic nerve swollen and pale (chalky color of the optic disc seen) upon ophthalmoscope, retinal cotton wool spots located at the posterior pole, and sometimes central retinal artery occlusion due to this artery and the SPCA both deriving from the ophthalmic artery.[1] Physical exam may also reveal diplopia, ptosis, nystagmus or pain or nodularity upon palpitation of the temporal artery. 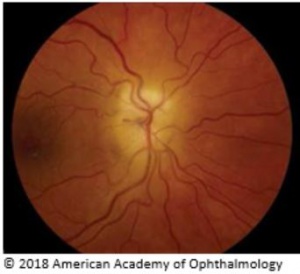 An elevated erythrocyte sedimentation rate (ESR) (up to 70-120mm/min) and/or serum C reactive protein (CRP) may aid in diagnosis. A 97% specificity for temporal arteritis has been reported in cases of AAION in which both ESR and CRP were elevated. Patients with NA-AION do not show these types of abnormalities.[1] Other tests in GCA include: platelet count for possible thrombocytosis, leukocyte count, and hemoglobin levels. Platelet count is often elevated acutely in cases of AAION and can be used in conjunction with elevated ESR and CRP levels to make a preliminary diagnosis.

Confirmation of the diagnosis of temporal arteritis by superficial temporal artery biopsy is recommended in cases of AION with clinical suspicion of arteritis. Positive biopsy findings (intimal thickening, internal limiting lamina fragmentation, and chronic inflammatory infiltrate with giant cells) is confirmatory for GCA. A negative biopsy doesn’t rule out arteritis (both discontinuous arterial involvement (‘skip lesions’) and solely contralateral temporal artery inflammation may result in false-negative results) with recent reports showing a 3-5% false-negative error rate. If initial biopsy is found to be negative and suspicion for GCA is high, a biopsy of the contralateral temporal artery should be considered.

Magnetic Resonance Imaging has recently provided evidence that it may be able to distinguish between A-AION and NA-AION. The imaging scores identified the acute stage of giant cell arteritis-related anterior ischemic neuropathy with a statistically significant relationship between the side of the AION and the side of the “central bright spot” i.e. optic nerve head enhancement.[7]

Ultrasound(US) of the temporal artery can provide some insight as well. It reveals characteristic dark wall swelling (halo) and acute occlusions in active AAION.[8] The temporal artery duplex ultrasound has demonstrated a sensitivity and specificity of 87% and 96% respectively with regard to clinical diagnosis.[8] US provides a noninvasive technique that can be used after seeing a patient with elevated ESR, CRP and platelet levels. It remains to be proven if ultrasound will one day be able to obviate the temporal artery biopsy which remains the current gold standard.

Optic Coherence Tomography is useful in assessing sectoral disc edema, retinal nerve fiber layer thickness, as well as documenting the resolution to a normal or an atrophic optic disc. Fluorescein Angiography can be used to confirm diagnosis of AAION as well. Delayed choroidal filling may be present and can serve as a diagnostic tool for AAION, given that the test is performed soon after the onset of vision loss.[1]

Early steroid treatment is essential. High dose systemic corticosteroids are standard.[1] Intravenous methylprednisolone at 1g/day for the first three days has been recommended for severe cases but has not been subjected to a head to head trial against oral steroids in GCA. Oral prednisone in the range of 60-100mg/day may be used initially and for follow up to intravenous pulse therapy. Treatment is usually continued at a high dose for a several months before beginning taper, but may be required for several years in severe cases to avoid permanent vision loss.[1]

Tocilizumab is a monoclonal antibody humanized for treatment of AAION. It works by binding to the alpha chain on the human interleukin 6 (IL-6) receptor. Through binding, tocilizumab blocks signaling and downregulates the acute phase reactions.[4] This monoclonal antibody has demonstrated effectiveness as a non-corticosteroid therapy for those dealing with AAION.[9] In some of the most recent literature, tocilizumab was very effective against corticosteroid resistant AAION, causing symptoms to halt immediately upon first dose. However, more research into its ability to serve a protective role against bilateral blindness must be conducted to rule out any confounding variables.[9]. Tocilizumab received FDA approval in 2017 for the treatment of giant cell arteritis.

Methotrexate is one of the most widely studied “steroid sparing” agents. Also known as a chemotherapy agent, methotrexate has demonstrated some great benefits to those patients dealing with AAION. A recent study indicated that the drug was able to significantly increase the probability of achieving a sustained discontinuation of using corticosteroids as well as decreasing the risks of relapses with the disease.[10] Corticosteroid therapy while effective, can be very toxic leading to almost 60% of individuals getting major side effects such as diabetes or cataracts.[10] At this time, methotrexate looks to serve best as a way to reduce exposure to corticosteroids and their adverse effects. The best therapeutic option may be conjunction therapy, in order to decrease exposure and possible relapse for those patients with AAION.

Without treatment, visual loss occurs in 54-95% of GCA patients),[11] typically within four months.[1] With corticosteroid therapy, the rate of such decline is reduced to an estimated 13%.[11] Visual recovery of the affected eye that has treatment is poor with a 15-34% improvement rate, which is higher with intravenous therapy. Worsening visual acuity has been reported in 9-17% despite therapy. Vision loss in both eyes is possible; however, most cases have indicated it to be frequently when one patient is unaware of vision loss in the first eye. The incidence of having this bilateral involvement involves timing heavily as well as how aggressively corticosteroid therapy is utilized.[1] However, if left untreated, bilateral vision loss can proceed quickly from either optic nerve, retinal or choroidal ischemia in up to 50% of cases.[4]