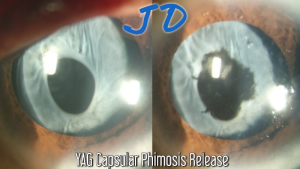 Anterior Capsular Phimosis Syndrome before and after NdYAG LASER release

Anterior capsule fibrosis and phimosis, commonly described as anterior capsule contraction syndrome (ACCS), is the centripetal constriction and fibrosis of the capsulorhexis following cataract removal. This is a painless condition that remains asymptomatic unless the constriction progresses into the visual axis potentially resulting in decreased visual acuity, pseudophacodonesis and occasionally intraocular lens dislocation. Treatment consists primarily of Nd:YAG relaxing of the anterior capsulotomy of encroaching tissue and recurrence is rare.

Continuous curvilinear capsulorhexis openings created in cataract surgery are known to contract slightly in non-pathologic eyes.[1] Anterior capsule fibrosis and phimosis is a condition that can occur after phacoemulsification and intraocular lens (IOL) implantation whereby the anterior capsulotomy excessively contracts and fibroses potentially obstructing the visual axis or causing late secondary complications to the IOL such as pseudophacodonesis and IOL tilt, decentration, or dislocation due to zonular laxity, weakness or dehiscence.

While the pathogenesis of ACCS is unknown, a possible cause involves populations of residual viable metaplastic lens epithelial cells (LECs) in or on the capsular bag present after cataract surgery that can undergo mesenchymal transition and differentiation to fiber-like cells.[2] Metaplasia and fibrosis of these cells contribute to the purse-string contracture and constriction or even complete closure of the anterior capsulotomy. This response may be exaggerated when there is an imbalance between centrifugal and centripetal forces that act on the zonules and the capsulorhexis perimeter.

The onset of decreased visual acuity in ACCS patients can range from 2 weeks to more than 3 months. [8][17]Capsule shrinkage and closure involves contraction of the fibrous membrane following fibrous metaplasia of LECs as well as LEC proliferation and outgrowth from the anterior capsule margin onto the IOL toward the center of the capsular opening,[2][18] likely mediated by LEC cytokine signaling.[19]

It has been suggested that the variable incidence of ACCS in the context of IOL type is due to insufficient peripheral capsule expansion by the IOL.[20]

Most patients with ACCS are asymptomatic until the process is in an advanced stage. Some may experience painless, progressive visual acuity decline. Glare, haloes, and monocular diplopia may occur if IOL decentration develops. Sudden severe vision loss may occur if IOL dislocation occurs.

Diagnosis of ACCS is addressed in the context of a routine ophthalmologic examination. Serial measurements of the CCC opening may help identify eyes undergoing progressive constriction. After phacoemulsification, onset of blurry vision, visual acuity decline, or compromised pupil function should prompt the examiner to look for signs of ACCS.

The extent of capsule shrinkage can be determined with slitlamp biomicroscopy. The size of the CCC opening created is visibly reduced, often non-circular, malpositioned, accompanied by fibrotic thickening, wrinkling, and in severe cases, complete closure. Also, the equatorial diameter of the capsule is reduced and the IOL can become decentered.

Symptoms often include painless, progressive blurred vision up to counting fingers, but many cases are asymptomatic. Advanced cases may be associated with glare, haloes, or monocular diplopia if IOL decentration is present. IOL dislocation results in sudden severe vision loss. Retinal detachment and ciliary body detachment have been reported.[26] [27] [28] [29]

The diagnosis of ACCS in post-op cataract patients is made on the basis of the presence of anterior capsule contraction confirmed with slitlamp biomicroscopy with or without decreased visual acuity compared to the postoperative best-corrected visual acuity (BCVA).

Most ophthalmologists perform Nd:YAG LASER anterior capsulotomy which is a simple and painless outpatient procedure.[20][30] [31] [32] Typically 4 or more approximately 1mm radial nicks placed onto the fibrotic anterior capsular annulus are effective in stopping the progression of contraction of the anterior capsule. The LASER is set to anterior focus and an energy of 1 to 3mJ. Radial Nick's are preferred, with care taken not to hit the IOL. Some surgeons have tried cutting out an annulus of capsule using the LASER, but it is not recommended as it deposits in the angle and often leads to raised intraocular pressure.

We recommend that this be accomplished when phimosis has progressed to less than 4mm to prevent potential late zonular dehiscence.

In less severe phimosis without invasion of the optical zone, the first choice of treatment is neodymium:YAG (Nd:YAG) laser capsulotomy while manually peeling of the fibrotic membrane is the technique of choice in severe cases with dense fibrous plaques to prevent incomplete reabsorption of loose capsular debris and to decrease the risk of inflammation and recurrence.[33] [34]

The prognosis for non-progression of contraction is very good after Nd:YAG anterior capsulotomy. Non-treatment places the eye at risk of pseudophacodonesis, IOL decentration, tilt, or dislocation, which may arise suddenly.

Above video by Dr John Davis Akkara, MD from India shows posterior capsulotomy and Anterior Capsular Phimosis Release by Radial LASER cuts using NdYAG LASER of 1064nm on. YAG III machine from Zeiss. The posterior capsulotomy is done at posterior focus and anterior using anterior focus. Energy is 1 to 3 mJ per shot titrated according to the response. Abraham capsulotomy lens with a central magnification button can be used, but was not used in this video.

Above video by Dr John Kanellopoulos, MD from USA shows the procedure of Anterior Capsular Phimosis Release in a patient with DSEK graft in addition to the ACCS.