Alexia without agraphia is an acquired disorder of reading.[1]Lexia comes from the Greek léxis, “diction”, “word”. When accompanied by the prefix “a-“, alexia means “without” reading. The syndrome was first described in 1892 by Déjerine and later in 1965 by Geschwind.[2] Both authors reported patients with right homonymous hemianopsia with or without color agnosia secondary to a stroke; all of them confirmed by autopsy.[2][3] The disorder manifests when the brain is not able to access information from the orthographic network of the language dominant hemisphere after receiving textual visual input.[4] Other names for this syndrome are word blindness, letter-by-letter reading, or “pure” alexia.[1][4]Pure refers to spelling and writing being preserved.[1]Alexia means the inability to comprehend written material.[5] The patients’ ability to write and spell is intact, but they are unable to spontaneously read, even what they have written seconds ago.[1][4][5]Other features of language, such as speech comprehension, are usually intact.[4] Current reading and spelling models are modular and theorize that the reading system has separate subsystems for orthographic, semantic, and phonological processing.[1]Each subsystem is thought to be domain specific so that each is specialized to process a certain aspect of reading-related information.[1]Since the subsystems are domain specific, one subsystem can malfunction without affecting the function of the other two subsystems.[1]In pure alexia, orthographic processing is impaired but semantic and phonological processing are intact.[1]In severe cases, patients have global alexia and are not able to read even single letters.[6]

Most cases of alexia without agraphia are due to cerebrovascular accidents from thromobotic or thromboembolic disease involving the left posterior cerebral artery (PCA), which results in an infarct of the left occipital cortex and the splenium of the corpus callosum.[4][7] The splenium is of vital importance in the interhemispheric transfer of visual information, therefore, even when the patients have intact reception and word-interpretation centers and an intact contralateral occipital cortex, the information cannot reach the dominant occipital lobe (typically left side) or interpretation center (i.e., a “disconnection syndrome”).[2][7] Less common causes are acute encephalopathy, multiple sclerosis, migraine, surgery for a left occipital lobe vascular malformation, epileptic focus, and occipital tumors (e.g., glioblastoma).[5][7][8] There are also forms of transient alexia (e.g., decompression sickness and migraine headaches).[9][10] Cases of “congenital alexia” were reported around 1914 in children with difficulty reading and some difficulty writing but no other cognitive impairment.[11] Any congenital occipital vascular, neoplastic, ischemic, inflammatory or infectious process (e.g., syphilis) however can produce congenital alexia.[11] These children were described as not being able to learn from written characters.[11] They could transpose syllables and letters but could not ever achieve normal reading.[11] In order to read, they would have to commit the “form” of the letter/word to memory.[11] Also, longer words were more difficult for the children than shorter words.[11] Children with this deficiency could learn just as quickly as others when taught orally.[11]

The most common risk factors are cardiovascular risk-related, which may lead to thrombotic or thromboembolic ischemic events.[5]

Alexia without agraphia is most often acquired secondary to occlusion of the left posterior cerebral artery without involving the angular gyrus.[1][4][5][7] In most right-handed people the dominant hemisphere is on the left side.[1][4][7] Knecht et al demonstrated an association between handedness and the language dominant hemisphere.[12] Knecht found that the incidence of right hemisphere language dominance increased linearly with the degree of left handedness.[12] Four percent of strong right handers, 15% of ambidextrous individuals, and 27% of strong left handers had right hemisphere language dominance.[12] This affects the input from the left visual cortex to the angular gyrus, which often leads to a right homonymous hemianopia.[5] However, there are cases that may not exhibit a complete right homonymous hemianopia but instead exhibit right hemiachromatopsia or color anomia.[3] In the latter, the lesion was located at the mesial occipitotemporal region in the left hemisphere.[3] In addition, infarction of the splenium (the posterior part of the corpus callosum) affects fiber tracts from the right visual cortex to the left angular gyrus but does not affect the right visual cortex.[1][4][5] Critical lesions have been identified to be at or around the visual word form area (VWFA).[13] Speech, writing, and vision in the right visual cortex are spared.[5] However, the patient is not able to read since visual information is not transmitted to the language area.[5] If the structures anterior to the splenium are not intact, the patient will also present with agraphia. Additionally, if the lesion is at the left angular gyrus, other symptoms could be present such as finger agnosia, acalculia and right left confusion, a syndrome called Gerstmann syndrome.[14] Recently, a new classification has been proposed for pure alexia stratifying based on neuroanatomical location. Lopez et al suggests referencing posterior lesions involving the splenium of the corpus callosum or the paraventricular white matter as disconnection alexia and naming more anterior lesions in the occipito-temporal cortex with damage of the visual word form area as cortical alexia. Disconnection alexia typically presents with visual deficits whereas cortical alexia can be thought of as pure alexia.[1]

Evaluation and management of any treatable vasculopathic risk factors is recommended for patients suffering a PCA stroke causing alexia without agraphia. Patients with other etiologies should have prevention and management directed at the underyling cause.

The diagnosis of alexia without agraphia syndrome is done by clinical exam and radiologic (typically cranial MRI) confirmation.

There is loss of the ability to read in a literate person, but recognition of faces, places and objects is preserved.[4][13] The patient is unable to read, but can still write.[7][13] When the patient tries to read a word or a nonword aloud, the patient will usually resort to naming, not sounding out, the individual letters slowly.[1] After naming the individual letters correctly, the patient will then say the word aloud.[1] Other possible associated signs include right visual field defects such as complete homonymous hemianopia, superior quadrantanopia, or isolated hemiachromatopsia.[2] If dyschromatopsia is present, it is restricted to the right hemifield, but naming of colors in the left hemifield may be abnormal.[2]

Right sided congruous homonymous hemianopia is often present due to the left occipital cortex lesion.[1][7] Right sided achromatopsia and color anomia have also been observed in patients with pure alexia.[3]

Diagnosis is based on the symptom of not being able to read, but the patient still maintains visual acuity and the ability to write.[7] Patients often have right homonymous hemianopia due to left occipital lobe involvement.[5] Neuropsychometric testing may also be used to diagnose alexia without agraphia.[5] It is a performance-based method to evaluate cognitive function and can be used to assess brain damage, brain disease, and mental illness.[15]

A CT scan and/or MRI of the brain with and without gadolinium can help to identify and differentiate a stroke from other etiologies such as abscess, tumors etc. MRI typically reveals a lesion of the left occipital lobe with an extension into the splenium of the corpus callosum, corresponding to the vascular distribution of the posterior cerebral artery.[5][7] An EEG may demonstrate slowing or epileptiform discharges over the left posterior temporal and occipital regions indicating a structural disturbance.[5] (See the image to observe the affected areas) Patients with PCA stroke should undergo the usual and customary evaluation and management of stroke risk factors including thrombotic and embolic etiologies. 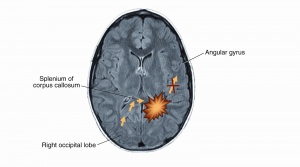 Hemianopic alexia: patients have difficulty reading the right side of a word due to a right homonymous hemianopsia from a left PCA lesion. Left hemiparalexia: isolated lesion of the splenium may lead to the inability to read the left side of the word in the absence of a homonymous hemianopic defect.

Many vision rehabilitation techniques can be tried in the treatment of pure alexia.[1] One technique includes improving letter-by-letter reading.[1] Oral re-reading is another technique that can be used.[7] Oral re-reading can lead to improved accuracy and reading rate.[1] Another technique involves increasing patients’ ability to access entire words in their orthographic lexicon through implicit tasks.[1] One way this is achieved is by presenting words and nonwords to a patient on a computer and having the patient indicate if the item is a word or not as quickly as possible.[1] Other techniques are tactile-kinesthetic techniques, which rely on the sense of touch and the sense of movement of muscles.[6] Tactile treatment involves tracing the outline of letters on patients’ skin and asking them to name the letter.[6] Kinesthetic treatment involves having patients write or trace letters with a finger before naming the letters.[6] A combination of tactile and kinesthetic training involves instructing patients to trace letters onto their own skin.[6]

Treatment of the underlying etiology is recommended.

Depends on the etiology.

So far there is no cure for alexia without agraphia.[6] There is not a treatment that has been shown to help patients read normally or near normally.[6] Since there is not a cure or treatment that significantly improves reading ability, strategies such as letter-by-letter reading, oral re-reading, and tactile-kinesthetic training are used to lead to some improvement.[6]