Visual acuity is the ability to visualize two objects as separate or the resolving power of the eye. It is defined as the smallest object that can be recognized at a particular distance. Visual acuity assessment in children remains a challenge for the ophthalmologist and needs to be correctly assessed for the early diagnosis of refractive errors, amblyopia, and other ocular pathologies.[1] [2] However, lack of cooperation and comprehension in young children makes it a challenging task. Pre-school children with lower visual acuity are usually unaware of their problem, unless the defect is bilateral and severe. Parents are also are unable to suspect low vision in their children especially in unilateral cases. As a result children with anisometropia and small angle strabismus usually have a delayed diagnosis. 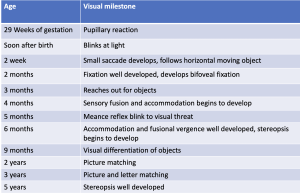 The fixation should be central, steady and maintained.

Menace reflex is a reflex blinking that occurs in response to a rapid moving object and visual threat. The reflex develops by 5 months of age

Brukner's reflex can help in rapid screening of the refractive errors. The test is performed in a dark room and both the eyes are simultaneously illuminated with the direct ophthalmoscope and the reflex is noted at a distance of 1 meter as well as at 3 meter . An inferior crescent suggests myopia, a superior crescent is seen in hyperopia. Resistance to occlusion of the eye with good vision also gives an estimation about the visual acuity discrepancies. 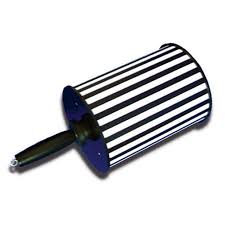 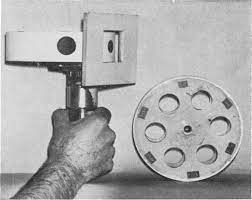 Catford drum test was introduced by Olive and Catford. It is an objective method to evaluate the objective visual acuity by inducing optokinetic nystagmus. The motor driven drum consist of separated black dots of various sizes on a white background projected through a screen measuring 4*6 cm. These dots can be rotated from left to right and then back from right to left in a rotating manner. The test is carried at a distance of 60 cm, and the child is instructed to watch the dot. The visual acuity is assessed by reducing the size of the dot until the smallest dot is found that can no longer induce optokinetic nystagmus. The end point is recorded and converted to given Snellen's equivalent. The drum has been calibrated between the visual acuity of 20/20 to 20/600 of Snellen's acuity based on the dot size at 60 cm. [7]

These tests are based on the principle that infant's attention is more attracted by a patterned stimulus as compared to a homogenous surface. Hence, if the infant is given a choice between a pattern and a plain surface the infant prefers towards the patterned surface. 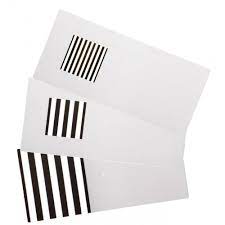 The Teller's acuity test was first described by Fantz [8] and was further developed by Dobson and Teller. During the test the observer is hidden behind the screen. The screen consist of a homogenous surface on one side and is alternated randomly with black white stripes on the other side. The baby is faced towards the screen and the observer records the direction of head movement and eye movements in response to the patterned stimulus. The test is suitable for testing visual acuity in infants upto 4 months of age as older infants are easily distracted. Visual acuities tested by this method range from 6/240 (20/800) in the newborn to 6/60 (20/200) at 3 months and 6/6 (20/20) at 36 months of age.[9] Later Teller's acuity cards were introduced by Mc-Donald et al. [10] Teller's acuity cards contain grating patterns of spatial frequencies. The cards are shown at a distance of 38 cm, an observer watches an infant's eye and head movements in response to repeated presentation of these cards. In children with amblyopia grating acuity is affected, because of which visual acuity can be under-estimated. As a visual screening test Teller cards has a high false positive results. 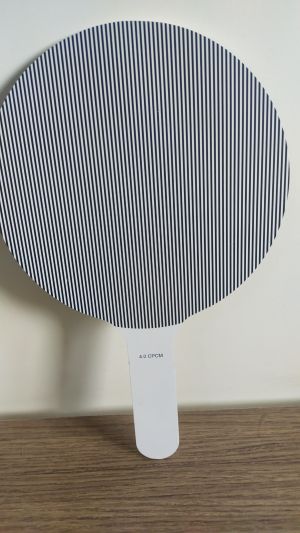 Lea gratings are preferential looking test used for visual acuity assessment of infants and children with disability. Grating levels printed on each handle are: 0.25, 0.5, 1.0, 2.0, 4.0 and 8.0 CPCM (cycles per centimeter of surface).

VEP is the measure of the cortical activity generated in response to the patterned stimulus, checker board or square wave grating. In young children flash or patterned VEP can also be used to record the visual acuity. Visual acuity of 6/6 (20/20) is achieved in VEP by 6-12 months of age.

Claud Worth in 1896 introduced the ivory ball test for the visual acuity assessment of children between 1-3 years of age. There is a set of 5 balls ranging from 0.5 inch to 2.5 inch. The child with both eyes opened is initially made familiar with the balls. One eye is then covered and each ball is then thrown at a distance of 18 feet beginning from the largest and the child is asked to retrieve each of the balls. [11] Visual acuity is assessed by the size of the smallest ball that can be seen by the child.

In this test the child is shown candy beads of different sizes at a distance of 40 cm. The child is then expected to pick up the candy beads. The smallest bead that the child can pick up gives the approximate estimation of the visual acuity. 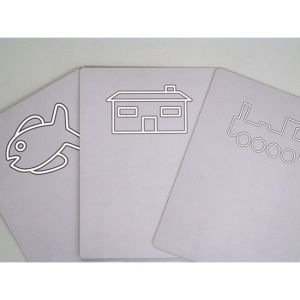 The test is based on the principle of vanishing optotypes and is a set of six cards with six easily recognizable shapes (house, fish, dog, duck, train) positioned either at the top or bottom half of a card. The cards are calibrated to give visual acuity of equivalent of 20/20 to 20/200 at 1 meter viewing distance. The child is comfortably seated and the cards are presented at eye level at a distance of 1 meter. The examiner watches the eye movements towards the shape. If the child is looking at the shape, then the next card is presented. This procedure is continued until no definite fixation is observed. The test is performed at 1 meter distance but altered to ½ meter if the child is unable to see the first card. The identification score and Snellen's equivalent of each card is mentioned at the back of card.

Miniature toy test was previously used with handicapped children and low intelligence patients. It used 2 sets of miniature objects. One set with examiner standing at 10 feet away and the patient is asked to pickup similar objects from his own set. The object chosen are easily identifiable small toys like automobile, planes, charts, knives, spoons etc. The same objects can be in 2-3 sizes so as to check the grade of vision.

Coins of different sizes are shown to the child and is expected to pick up the coins easily visible.

Lea symbol test were developed by Finnish ophthalmologist Dr Lea Hyvärinen. The oldest and most basic form of the LEA test is simply referred to as the "LEA Symbols Test". The Lea symbol test consists of four optotypes an apple, a pentagon, a square, and a circle. These easily identifiable shapes help preschool children to be tested for visual acuity long before they become familiar with the letter and numbers used in other standard vision charts. Becker et al found Lea symbols to be useful for the visual acuity evaluation in early childhood. [12] 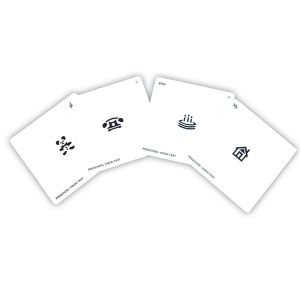 The pre-school vision test or the Allen picture card test consists of seven black and white line drawing of birth day cake, telephone, horseman, teddy bear, automobile, house and tree. These line drawings are drawn on a plastic (10cmx10cm) white cards. The child patient will be shown at a closer distance so that he recognizes and identifies them. 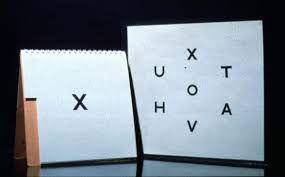 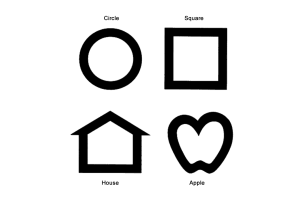 This test uses letters which children can recognize and copy at an early age. The letters V T O H X A U are used and are shown to the child one at a time on flip card. The child is given a key card showing all the letters and he has to point the letter he sees. After explaining the procedure to the child the test can be done at 6 meters or 3 meters. Sheriden Gardiner test is the most accurate of the illiterate vision test in children.

Lippman's HOTV test is similar to Sheridan letter test. It is a simpler version and consist of only four letters HOTV. 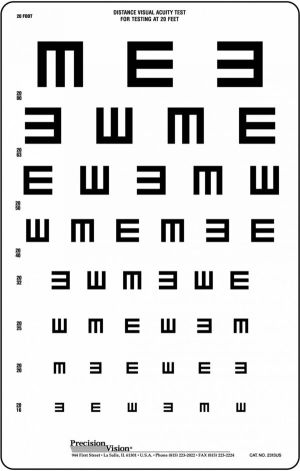 The E chart is commonly used. The chart consist of E with limbs of E pointing in various directions. The test can be used in two forms either in the form of a chart (like Snellen's) or printed on an individual card. 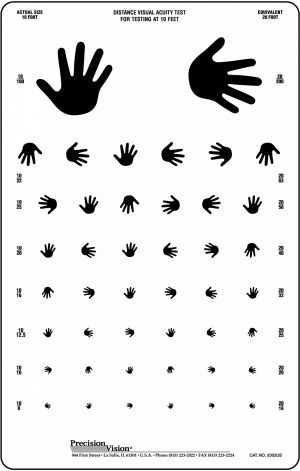 This test consist of pictures of hands with fingers pointing towards various directions.

The test is usually used for the visual acuity assessment in illiterates. In this test the broken ring is printed in various directions. The test is performed at a distance of 6 meter and the child is asked to indicate the direction in which the ring is open.

In older children who can recognize alphabets Snellen's chart can be used.

Assessing visual acuity of children requires patience and takes longer than usual as compared to adults. The examiner should thus be well versed with all the possible methods for evaluation of visual acuity.