Optical Coherence Tomography Angiography (OCT-A) is a non-invasive imaging test that allows a detailed and three-dimensional study of retinal and choroidal vessels. In this text, we cover the anatomy of normal retinal vasculature and its analysis by OCT-A.

1. Vascularization of the posterior pole

The ophthalmic artery, the first intracranial subdivision of the internal carotid artery, gives rise to a series of arteries, responsible for nourishing the various ocular structures. The retina is supplied by two distinct vascular systems from important branches of the ophthalmic artery: the central retinal artery (CRA) and the posterior ciliary arteries (PCA). We now describe the normal anatomy of the vascularization of the posterior pole.

1.1 Anatomy of retinal vascularization Retinal blood vessels from the CRA supply the inner two-thirds of the retinal thickness. The CRA is considered a “terminal branch”, since it does not present significant anastomoses with other arteries in its course (1). Immediately before leaving the optic nerve, the CRA divides into superior and inferior branches, which measure an approximate diameter of 80 μm at the level of the optic disc edge (contrasting with the average diameter of 120 μm of the veins at this level) (2). Then, the upper and lower branches divide into their respective temporal and nasal branches. This anatomical distribution is maintained throughout the retina, as normal retinal vessels rarely cross the horizontal raphe. Occasionally (18% to 32% of eyes), there is a cilioretinal artery from the ciliary circulation, which irrigates the macula (3).

Retinal arteries, similar to veins, remain in the nerve fiber layer, allowing capillaries to arrange themselves into various networks in the inner retina. At the histological level, we found four vascular networks in the retina of the posterior pole (3):

• The peripapillary radial capillary network, located in the nerve fiber layer and around the optic nerve head;

Several scientific publications have resorted to OCT-A to better clarify this anatomy, as we will explain later.

Peripapillary radial capillaries are in a "2-D" network in the nerve fiber layer and are superficial to the "3-D" network of capillaries in the inner retina. These capillaries arise from single arterioles around the disc from the short PCA, not from vessels within the disc. Peripapillary capillaries have a radial distribution, rarely anastomose (in contrast to other intraretinal capillaries) and have a limited extension to the posterior pole (4). The vessels of the superficial retinal plexus are evenly distributed, resembling a spider's web. They present a linear and continuous shape, with a homogeneous wall. The capillaries of the deep plexus have a regular distribution around the foveal avascular zone (FAZ), with small and complex interconnections of a finely reticular shape, resembling a meshwork (1). To ensure adequate perfusion of all cells in the inner retina, the retinal capillaries have a configuration described as a “mesh”. Capillary-free zones are distinguished around each artery and each larger vein. Capillaries are also absent in the extreme periphery of the retina and in the fovea, delimiting the FAZ, with a diameter of 400-500 μm in normal eyes (1).

Venous drainage from the retina usually accompanies arterial vascularization. Retinal veins (especially venules) are also found in the inner retina. Occasionally they cross with the corresponding arteries, sharing the adventitial layer with them. Its drainage is carried out into the central retinal vein, which also receives blood from the optic nerve.

1.2 Anatomy of the choroidal vascularization

The supply of oxygen to the outer third of the retina (avascular) is the responsibility of the choroid, which in turn receives its blood supply from the short and long PCA. The choroid constitutes the most vascularized tissue of the eyeball, histologically being divided into 5 layers (from the innermost to the outermost): 1) Bruch's membrane; 2) Choriocapillary layer; 3) Sattler layer; 4) Haller's layer; and 5) Suprachoroidal layer. 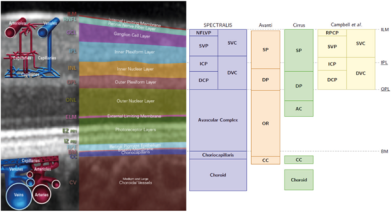 The choriocapillary layer, a fine network of fenestrated and highly anastomosed capillaries in a single plane beneath the retinal pigment epithelium (RPE), allows for the diffusion of blood to the outer third of the retina (photoreceptors and RPE). At the foveal level, it has the maximum capillary density, with a thickness of approximately 10 μm, which decreases to 7 μm at the periphery. Its capillaries come from the arterioles of Sattler's layer, each of which gives rise to a bed of capillaries of hexagonal or lobular shape and thus determines the patch-like pattern of the choriocapillaris. In addition to the choriocapillaris, the choroid has two other vascular layers: Sattler's layer, which includes small and medium-sized arterioles; and Haller's layer, made up of large-caliber vessels (1). Venous blood drains through vortex veins, usually 4 to 7 in number in each eye.

1.3 Anatomy of the optic nerve vascularization

We briefly describe the blood supply of the optic nerve, which varies according to its different segments. The retrolaminar portion of the optic nerve is vascularized mainly by pial vessels and by the short PCA, with a small contribution from the CRA. The laminar portion is supplied by the posterior short ciliary arteries or by branches of the Zinn-Haller arterial circle, an arterial ring located in the thickness of the sclera, around the optic nerve head (supplied by paraaortic branches of the short PCA). CRA does not contribute to the irrigation of this segment. Finally, the prelaminar segment of the nerve is supplied by the short PCA (cilioretinal arteries, if present) and by recurrent choroidal arteries. The nerve fiber layer is supplied by the CRA, as previously mentioned (3).

2. Study of vascularization of the posterior pole by OCT-A

The resolution of the OCT-A allows a detailed study of the retinal vascularization, which in the past could only be obtained by histological sections. The OCT-A is capable of separately evaluating a layer of any thickness and depth (slabs) in the retina and choroid, making it especially useful in the study of the capillary layers of the retina. Unlike conventional "2-D" angiograms, OCT-A technology makes it possible to obtain "3-D" images of the macula and visualize the peripapillary capillaries that supply the retinal nerve fiber layer. Furthermore, the evolution of OCT-A software has allowed the acquisition of increasingly large scans (3x3 mm, 6x6 mm or even 12x12 mm).

The segmentation process of the obtained scans allows the projection of the plexuses in "2-D" angiograms. Each OCT-A device performs an automatic segmentation of the scans based on anatomical reference planes with different reflectivities, such as the internal limiting membrane (ILM) or Bruch's membrane (Fig. 1). The automatic segmentation of most devices determines the presentation of four predefined face angiograms (Fig. 2), based on the existence of two retinal vascular plexuses (superficial and deep):

1) The superficial capillary plexus (SCP), located in the nerve fiber and ganglion cell layers, at the same level as the arterioles and major venules. It is easily visualized with a 60 μm section at ILM level;

2) The deep capillary plexus (DCP), located between the inner nuclear layer and the outer plexiform layer. It is made up of 2 plexuses (deep and intermediate) that most devices cannot individualize. It is best evaluated with a 30 μm section at the level of the internal plexiform;

3) The avascular outer retina, which comprises the outer nuclear layer and photoreceptors. This is a normally avascular area where any apparent flow is a projection artifact or results from pathology (6);

En-face angiograms (and representation of the respective plane in B-scans) at the level of the superficial plexus (a), deep plexus (b), avascular retina (c) and choriocapillary layer (d). Images acquired with the OCT-CIRRUS AngioPlex™ system (Carl Zeiss Meditec Inc., Dublin, CA, USA).

More recently, OCT-A studies have largely focused on the delimitation of a third capillary plexus in the perifoveal retina, the intermediate capillary plexus (ICP), previously evidenced in histological studies (7). Customized segmentation analysis in OCT-A have shown that ICP is qualitatively and functionally distinct from SCP and DCP, so its evaluation in clinical practice may have important implications in several pathologies that course with macular ischemia (8). However, there is still no consensus on its exact location. Many authors locate the ICP in a narrow slab at the inner edge of the inner nuclear layer8, while others argue that this plexus also reaches an outermost portion of the ganglion cell layer (9).

One of the main variables in the analysis of OCT-A images is the method by which the layers are segmented and how the predefined retinal angiograms are assigned to the "superficial" and "deep" slabs. These targeting schemes vary significantly between studies. Furthermore, users should be aware that even different commercial devices do not have standardized segmentation methods between them (Fig. 1). Although no systematic studies comparing the different segmentation strategies have been performed, these differences do not seem to be significant when the retinal anatomy is maintained (1). On the other hand, although automated segmentation is a useful starting point, manual adjustment of segmentation lines may be necessary to correct segmentation errors, which are relatively common in case of retinal pathology (5).

Some commercial devices, such as the Zeiss AngioPlex™ or the OptoVue AngioVue™, have adapted segmentation schemes at the peripapillary retinal level. Through automatic, semi-automatic or manual segmentation schemes, it is possible to precisely define the nerve fiber layer or the plane containing the small branches of arterioles and venules to investigate the peripapillary radial capillaries. Studies comparing OCT-A and fluorescein angiography demonstrate that this peripapillary capillary network is better visualized on OCT-A images (12). Thus, OCT-A has been useful in the study of the peripapillary capillary network, which seems to be implicated in the pathogenesis of glaucoma and most retinal vascular diseases (13).