Trabeculectomy has long been considered the gold standard in the surgical treatment of glaucoma due to its efficacy in lowering intraocular pressure (IOP). However, with the IOP-lowering capacity of trabeculectomy, comes risks for short- and long-term complications, including bleb leaks, infection, and over-filtration leading to choroidal effusion, hemorrhage, accelerated cataract progression, and hypotony. A number of glaucoma surgical devices and techniques have been developed in the last several decades, however few, if any, have been able to reliably replicate the IOP-lowering-effect of the trabeculectomy, without the complication risk.

Non-penetrating deep sclerectomy (NPDS) is a procedure which was first described in 1989, and has been shown to offer a similar, albeit by some accounts, slightly inferior, IOP-lowering effect with less risk of complication compared to trabeculectomy.[1] The earliest reports of non-penetrating filtering glaucoma surgery came from Kasnov and Walker in 1964, describing the sinusotomy.[2] The sinusotomy is a non-penetrating surgery which involves opening Schlemm’s canal, and excising a block of the canal’s outer wall. Non-penetrating procedures were further refined over the next several decades and in 1989, Kozlov and Fyodorov described the deep sclerectomy.[3] They detailed a surgery in which a flap of deep sclera was removed, Schlemm’s canal was deroofed, and the underlying juxtacanalicular trabecular meshwork was removed, forming a scleral space through which aqueous humor would drain. By removing the juxtacanalicular meshwork, NPDS effectively targets the site of maximal outflow resistance, thereby increasing aqueous humor outflow and lowering IOP. By not penetrating full thickness through the trabecular meshwork into the anterior chamber, NPDS was thought to offer more reliability and safety than trabeculectomy. However, NPDS has proven to be a technically difficult procedure with a long learning curve, and a high rate of conversion to trabeculectomy particularly in the hands of inexperienced surgeons.[4]

Today NPDS is considered a clinically reasonable option for many types and severities of glaucoma, and while rarely done in the United States, has become the preferred surgical technique for treating glaucoma in many European countries.[5]

NPDS is indicated for the treatment of primary and secondary open angle glaucoma. Patients who have uncontrolled IOP despite maximally tolerated medical therapy (MTMT), laser, and/or incisional surgery, are often good candidates for this procedure. In fact, NPDS may be the best first-line surgical option in a number of clinical scenarios, based upon results published in the literature. Specifically, high-risk eyes or monocular patients who require a surgical option with a lower risk of complication[5], and in eyes which have already undergone a prior successful NPDS in the fellow eye.[6] Patients with uveitic glaucoma also benefit from NPDS, likely due to the decreased inflammation produced compared to penetrating procedures.[7][8] Eyes with long axial lengths are at a higher risk of hypotony after penetrating filtering surgeries such as trabeculectomy, and for this reason, should be considered for NPDS as well.[9] Patients with congenital glaucoma have also been shown to benefit from NPDS.[10]

An important patient factor that should be considered prior to NPDS is the ability to adhere to post-operative follow-up appointments and topical medication regimens. Like after a trabeculectomy, postoperative management focuses on early detection and treatment of infection, inflammation, and over-filtration. Close monitoring and prompt complication management increase the success of the surgery.[11]

The contraindications to NPDS include non-functioning, closed, and narrow-angles, as this pathology prevents or limits aqueous humor outflow through the trabeculo-Descemet membrane (TDM), which NPDS relies on to have an effect.

Close monitoring and prompt complication management increase the success of the surgery.[11] We suggest the following post-operative follow-up schedule:

Postoperative medical treatment aims to decrease the risk of infection and inflammation. There is no consensus regarding the ideal post-operative medication, but steroids are generally considered more effective than NSAIDs,[25] and high doses of corticosteroid with a slow taper seem to lead to fewer complications and better IOP stabilization.[26]

The authors propose the following postoperative regimen: combined dexamethasone-antibiotics (e.g., tobramycin + dexamethasone, six times a day for 1-2 weeks, then four times a day for another 2-4 weeks), tropicamide (at night for two days, to decrease inflammation), NSAIDs (two to three times a day for 15 days). The patient must be advised to refrain from physical activity, shield the eye, and present for care if pain or decreased vision occurs.

NPDS generally has a favorable safety profile. The range of complications are similar to those associated with filtering surgeries. Examples of such complications include: bleb leaks, infection, over-filtration leading to choroidal effusion and hemorrhage, accelerated cataract progression, and hypotony.[9]

The two most common intraoperative complications during NPDS are an inability to find Schlemm’s canal, and TDM perforation. An inability to find Schlemm's canal occurs due to an insufficiently deep dissection of the scleral canal, often due to fear of dissecting too deep into the choroid. In these instances, a third deep scleral flap can be created to achieve the correct plane needed to identify Schlemm’s canal. TDM perforation can occur relatively easily as this membrane is exceptionally fragile. While a small perforation without iris prolapse has no consequence, a large perforation may lead to iris incarceration/prolapse. A large perforation leading to iris prolapse requires either viscoelastic injection or a peripheral iridectomy, effectively leading to trabeculectomy conversion.[9][12]

Intraocular hemorrhage is a rare complication of NPDS, as the IOP reduction is slower and more predictable compared to penetrating surgeries.[27] Hypotony is very common in the early postoperative period and often does not need to be treated if not associated with a shallow anterior chamber or maculopathy. In fact, Shaaraway showed that IOP < 5mmHg in the first postoperative day was a predictive factor for a successful surgery.[12]

Increased IOP in the early post-operative period can occur due to robust inflammatory response, retained viscoelastic, insufficient TDM dissection, blockage of the scleral bed or bleb by corneal or scleral tissue, or iris incarceration. Insufficient TDM dissection can be treated with goniopuncture, and blockage of the scleral bed can be treated with surgical revision. As previously mentioned, iris incarceration can be addressed with viscoelastic injection, miotics, iridotomy, iridoplasty, or with surgical revision. Late increased IOP can occur due to a less permeable TDM, bleb fibrosis, or steroid response. A progressive rise in IOP occurs in up to 60% of patients during the first year after NPDS,[9][12] and if due to reduced TDM permeability, can be managed with goniopuncture.

Descemet membrane detachment can arise weeks or months after NPDS and manifests with deep corneal bullae and stromal opacity. The cause is typically a rise in IOP due to an encysted bleb, trauma, or excessive eye massage. Treatment consists of draining the stagnant fluid and addressing the underlying cause. A period of observation is recommended before attempting a descemetopexy with intracameral air.[28]

Blebitis and endophthalmitis are extremely rare complications after NPDS, with only one case reported in the literature.[29] Hypotony is also very uncommon, with one retrospective cohort finding the rate of postoperative hypotony-related complications to be 5.6%, five years after NPDS.[30]

After NPDS, the primary determinant of aqueous outflow is the TDM. Resistance to aqueous flow through the TDM may increase over time, inducing a rise in IOP. When this occurs, laser goniopuncture (LGP) can be performed which creates a full-thickness hole in the TDM, decreasing outflow resistance of aqueous humor into the sub-conjunctival space.[31] 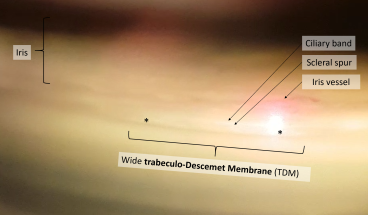 Iridocorneal angle before goniopuncture. * represent the preferable areas for the laser impacts.

The occurrence of severe complications after LGP is rare. The most frequent complications are iris prolapse/incarceration, which occurs in up to 17.6% of cases, and bleeding. Di Matteo et al. observed less iris incarceration after LGP if prophylactic iridoplasty and/or iridotomy were previously performed.[33] Therefore, iridoplasty should be performed prior to goniopuncture especially in eyes with convex peripheral irises, shallow peripheral anterior chambers, and high pre-treatment IOP. 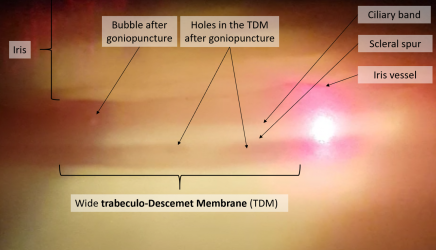 Iridocorneal angle after goniopuncture; with detailed structures and legends.

The application of IOP lowering medication before goniopuncture decreases the risk of iris incarceration and hemorrhage.[34] In the case of iris prolapse, iris retraction can be attempted with pilocarpine, and/or repeated argon laser applied to the peripheral iris. If these interventions fail, surgical revision may be required for iridectomy and iris repositioning. If hemorrhage occurs during LGP, the procedure should be discontinued, and pressure should be applied to the eye. In case of shallow or flat anterior chamber after LGP, cycloplegia should be added, and if persistent, the anterior chamber should be reformed with viscoelastic.[34] Other rare complications after LGP include IOP spike, iritis, peripheral synechia formation, blebitis, and hypotony.

NPDS is a reasonable option for many primary and secondary open-angle glaucoma patients at any point in their disease course. Though it has a long learning curve and requires greater operative time, NPDS carries a lower complication rate, and provides a a similar, albeit slightly inferior, IOP-lowering effect compared to trabeculectomy.[9][27][5]

NPDS with collagen implant has been reported to bring satisfactory results over a three year follow-up, with a reported mean decrease in IOP to 12.4 ± 3.9 mmHg (55.4% reduction) at three months and 13.0 ± 3.8 mmHg (53.2% reduction) at three years of follow-up.[36] One study found the complete success rate (IOP ≤ 21 mmHg without medication) of NPDS with collagen implant to be 62% and 57%, at five and seven years, respectively.[37] In eyes that have failed a previous trabeculectomy, NPDS with mitomycin-C has shown a 65% complete success rate (IOP <21mmHg under no topical medication).[38] Khairy et al. confirmed that NPDS reduced IOP and minimized the risk of post-operative complications compared to trabeculectomy, however, also found that NPDS failed to maintain a low IOP after long-term follow-up (18.8% success at 30 months).[39]