Cranial nerve three (CN3) palsies are overall rare in the pediatric population with up to 50% diagnosed as congenital, followed by trauma, inflammation, and vascular etiologies .[1] [2] [3] It may also uncommonly present in the setting of migraine, infection, or neoplasm. [1][4] When combined with both congenital sixth and forth nerve palsies, congenital third nerve palsies have an estimated incidence of 7.6 per 100,000. [5]

Although exact mechanisms of congenital CN3 palsy development is unknown, it is thought to be secondary to damage of the peripheral nerve, frequently during adverse perinatal events, in most incidences, as opposed to injury or developmental factors within the brainstem. [6]

Careful assessment and documentation is important to assess for amblyopia and should be performed as appropriate given a patient’s age and maturity.

Pupillary involvement allows better localization of lesion, suggesting pathology involving CN3 or along the sympathetic pathway. Although CN3 palsy is more commonly associated with enlargement of the affected side, smaller pupils have also been reported and is thought to be related to aberrant regeneration. [8] There are also many cases in which the pupil is spared, thus a diagnosis of CN3 palsy cannot be ruled out based on presence of pupillary involvement.

Complete CN3 palsy results in paralysis of the inferior rectus, inferior oblique, medial rectus and superior rectus. This would result in inability to adduct, elevate, or depress the eye. As a result, the unopposed actions of the superior oblique and lateral rectus may cause the eye to be abducted and depressed. Partial nerve palsies can lead to variable amounts of muscle paralysis in the muscles and directions listed above. Head posturing performed to promote fusion should be noted.

Upper eyelid ptosis results from paralysis of the levator muscle, which is also innervated by CN3. As noted with the extraocular muscles, the patient may present with complete or partial muscle function leading to variable severity. Most important to prevent amblyopia is determining whether the visual axis is obstructed by the lid. For surgical planning, measurements of the patient’s MRD1 and levator function should be obtained. Presence of a Bell’s phenomenon should be evaluated.

Two-year-old male with severe ptosis in setting of CN3 palsy.

Given the potential for an underlying neurologic lesion, it has been recommended that neuroimaging be obtained in all children who first present with a CN3 palsy. [3] Discussion with pediatric neurology has also been advised. [8]

Aberrant regeneration of the CN3 has been described in as many as one-third to one-half of patients with CN3 palsy. [1][7][9] This presents as synergistic movement of either the lids or extraocular muscles with jaw movements- usually most apparent while the patient is eating. This suggests the formation of secondary connections with the ipsilateral the trigeminal nerve.

Rare cases of cyclical spams involving the oculomotor nerve have been reported in children with congenital CN3 palsy, thought to be a form of aberrant regeneration. These patients present with signs of CN3 palsy but with regular, short bursts of spastic movements causing elevation of the lid, adduction of the eye, miosis, and increased accommodation. [10] [11]

Although usually requiring surgical intervention for binocularity, treatment may begin with occlusion therapy and glasses for refractive error and/or prism. Botulinum A toxin has also been trialed with varying success in this population. [7][12]

The goal of strabismus surgery is to allow binocular fusion in primary gaze in addition to reading. Surgery to improve ocular alignment can be complex due to the involvement of multiple muscles and the possibility of aberrant regeneration.

The most common surgery performed in these patients is a horizontal rectus recession and resection provided most patients present with exotropia. [12] To aid with vertical deviations, horizontal muscle transpositions or superior oblique weakening procedures are the most common procedures employed. [6][12]

In addition to strabismus surgery, treatment of ptosis associated with a CN3 palsy is essential to prevent development or progression of amblyopia and to provide the best chance of binocularity. In general, it is recommended to perform strabismus surgeries prior to eyelid surgery for the best lid position outcomes; this is most important when vertical muscles are involved as the eyelid position may be altered by vertical muscle surgery.

The two main surgical options for these patients are a frontalis sling or levator advancement. The selection between the two may be based on multiple factors, including provider experience and amount of levator function and degree of ptosis.

A frontalis sling establishes a connection between the frontalis muscle and the upper tarsal plate, increasing palpebral fissure aperture with brow elevation. This is recommended in patients with poor levator function, measuring less than 3-4 mm and severe ptosis.

Common frontalis sling materials are facia lata and silicone, though a wide variety of other synthetic materials are available. Facia lata is harvested from the lateral thigh and thus requires a second procedural site. It may be autogenous in patients older than three to six years of age, or from a donation bank. Synthetic materials avoid the risk of second site surgery, rejection or theoretic disease transmission, however, may be lead to an increased rate of recurrent ptosis. [13] [14] Autogenous fascia lata remains the gold standard.

If greater than 5 mm of levator function is present, levator advancement is frequently performed. [15] Advancement of the levator to the anterior surface of the tarsus effectively shortens the aponeurosis and tightens the muscle, strengthening upper lid opening. Sequelae associated with both frontalis sling and levator advancement procedures include undercorrection or overcorrection, which may require further surgical interventions. Importantly, lagophthalmos is a frequent complication following surgery, which can lead to exposure keratopathy. Patients with poor Bell’s phenomenon are extremely high risk, leading providers to consciously undercorrect these patients. [16] [17] 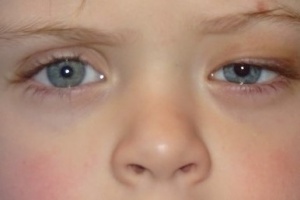 Frequent follow up and is recommended while the child is of amblyogenic age to prevent long-term outcomes. As mentioned above, this is likely to include multiple surgeries in addition to conservative treatments.

The development of stereopsis is rare with CN3 palsies, though varied results of visual acuity have been reported with meticulous treatment [3][18] [19] and early intervention.