Posterior circulation strokes involving the brainstem can result in subsequent ophthalmologic manifestations. Brainstem stroke syndromes are a subtype of strokes which lead to ischemia of the structures of the brainstem. The midbrain, pons, and medulla oblongata are components of the brainstem which control basic body functions such as consciousness, breathing, proprioception, heart rate, and blood pressure. The midbrain—or mesencephalon— and pons have several functions which include involvement in the afferent and efferent pupillary and ocular motor (efferent) pathways. The brainstem including the medulla also contains vestibular-otolith pathways and the ocular sympathetic pathway which can produce skew deviation, nystagmus, or Horner syndrome respectively. 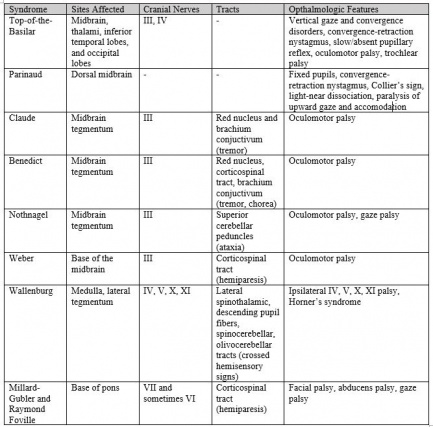 The neuro-ophthalmologic manifestations of strokes involving the brainstem depend on the location of the ischemic event. Thus, it is essential to understand how brainstem structures are involved in visual pathways.

Additionally, the nuclei of the oculomotor nerve (III) and trochlear nerve (IV) are located in dorsal rostral and caudal midbrain, respectively. The nuclei of the trigeminal nerve (V), abducens nerve (VI), and facial nerve (VII) are also found in the pons. Strokes which involve territories of the dorsal midbrain may cause cause dilated pupils, light near dissociation, lid retraction (Collier sing), lid ptosis, nystagmus (convergence retraction), and paralysis of upward gaze (or later downgaze) and accommodation.[7]  Thus, the clinical impact that posterior circulation strokes have on the eyes depends on the location of the stroke.

Strokes which lead to ischemia of the pons can disrupt the horizontal gaze pathway resulting in sixth nerve palsy, internuclear ophthalmoplegia (INO), horizontal gaze palsies or combinations of these findings (e.g., “one and a half syndrome”). The basilar artery is formed where the two vertebral arteries join at the base of the skull. The basilar artery supplies the cerebellum, brainstem, and occipital lobes (posterior cerebral arteries). Visual processing takes place in the occipital lobes and adjacent temporo-parietal regions.[8] Thus occlusions of the distal basilar artery can lead to bilateral (cortical) vision loss.[3][9] A posterior cerebral artery distribution infarct will result in contralateral homonymous hemianopia secondary to occipital ischemia. Bilateral PCA infarcts can cause juxtaposed homonymous hemianopsias.

Locked-in syndrome (LIS) usually follows a brainstem stroke and is characterized by paralysis of all voluntary muscles (except eyes' movements or blinking) and lack of speech with preserved consciousness.[11] Artery of Percheron (AOP) occlusion is a rare cause of ischemic stroke characterized by bilateral paramedian thalamic infarcts, with or without mesencephalic infarction. Clinically it presents with mental state disturbances, hypersomnolence, aphasia/dysarthria, amnesia and ocular movement disorders, including vertical gaze palsy.[12]

Table 1: The table summarizes a variety of brainstem stroke syndromes and their according sites of ischemic compromise, cranial nerve defects, and ophthalmologic features.[3][7][10][13]

It is important to distinguish the presentation of an acute anterior circulation stroke from a posterior circulation stroke. Strokes involving the cerebellum, occipital lobe, and brainstem present with vertigo, diplopia, dysarthria, dysphagia, ataxia, and “crossed” deficits—which refer to cranial nerve deficits on one side and sensory or motor defects of the opposite side.[1] Ophthalmologic manifestations of brainstem strokes include  pupil abnormalities, ptosis, and cranial nerve III, IV, V, or VI palsies. These ophthalmologic aberrancies can often be detected via thorough history taking and physical examination.

A crucial step of working up a stroke is to rule out or confirm a hemorrhagic stroke. This is accomplished via a non-contrast computed tomography (CT). A head CT is vital in acute stroke since a rapid diagnosis of ischemic stroke (and exclusion of intracranial bleed) can expedite the administration of thrombolytic therapy (e.g., tissue-type plasminogen activataor (tPA)). However, non-contrast CTs are less adept at detecting strokes in the posterior circulation (sensitivity of roughly 60%) compared to anterior circulation strokes (sensitivity >90%).[1] For strokes of the posterior circulation, magnetic resonance imaging (MRI) is a superior (sensitivity >80%) modality compared to CT.[1] Furthermore, MRI can also distinguish vascular etiologies from masses and structural injuries. Diffusion weighted imaging (DWI) on cranial MRI are particularly useful sequences for visualizing acute ischemia (restricted diffusion).

Ophthalmologic symptoms of brainstem strokes include:

Other clinical features that accompany strokes of the posterior circulation include vertigo, dysarthria, dysphagia, unsteadiness, ataxia, and coma. Crossed deficits are also characteristic of posterior circulation stokes. Patients can experience isolated symptoms or a combination of the mentioned clinical features depending on vascular regions affected by the stroke.[1]

A complete 8-point eye examination can detect most of the ophthalmologic features caused by brainstem strokes. Signs such as ptosis and cranial nerve palsies can be observed via basic inspection of the patient. Moreover, an assessment of the extra-ocular movements in all 9 cardinal positions of gaze can be utilized to detect cranial nerve and gaze palsies. Visual field exams can estimate the extent of vision loss. While the physical examination is a powerful tool in neuro-ophthalmology, imaging techniques can help diagnose and localize the stroke.

Ophthalmologic signs of brainstem strokes include:

Horner syndrome typically presents with ispilateral partial, mild, ptosis (drooping or falling of upper eyelid), miosis (constricted pupil) with or without facial or body anhidrosis (loss of sweating) due to a disruption in the sympathetic nerve supply. [14]The sympathetically innervated Muller muscle only produces mild (1-2 mm) ptosis and the unnamed lower lid retractor can produce ipsilateral “upside down” ptosis.  Complete or partial oculomotor nerve palsies (CN III) can cause a partial or complete ipslateral ptosis, ophthalmoplegia (“a down (hypotropic)-and-out (exotropic) eye, and a dilated pupil. A third nerve nucleus or fascicle can be involved in brainstem stroke. A nucleus involvement is characterized by bilateral (or no) ptosis from involvement single caudate nucleus and a contralateral superior rectus palsy due to the opposite innervation. Ptosis is observed because the oculomotor nerve innervates the levator palpebrae muscle, which is the predominant muscle used for eyelid retraction.[15] A 4thnerve nucleus involvement is characterized by contralateral superior oblique palsy as the nerve exit dorsally from brain stem and cross over to the opposite side.

An RAPD is a defect in the afferent response. It is important to be able to differentiate whether a patient is complaining of decreased vision from an ocular problem such as cataract or from a defect in the afferent pupil pathway which when  present, the affected pupil will not constrict to light when light is shone in the that pupil during the swinging flashlight test. However, it will constrict if light is shone in the other eye (consensual response). The swinging flashlight test is helpful in separating these two etiologies as only patients with damage in afferent pupil pathway will have a positive RAPD.[16] In Parinaud’s syndrome, the pupil is usually mid-dilated and show light-near dissociation. Lid retraction—referred to as Collier’s sign—will also be apparent in Parinaud’s syndrome.

A thorough history and physical examination can be used to diagnose strokes of the posterior circulation. Although, imaging is often utilized to assist in localizing the region of the stroke.

The first step of diagnosing a stroke is to rule out or confirm a hemorrhagic stroke. This is accomplished via a non-contrast computed tomography (CT). However, non-contrast CTs are less adept at detecting strokes in the posterior circulation (sensitivity of roughly 60%) compared to anterior circulation strokes (sensitivity >90%).[1] For strokes of the posterior circulation, magnetic resonance imaging (MRI) with diffusion weighted imaging is a superior modality—with a sensitivity of 80-95%—compared to CT.[1] Furthermore, MRI (especially DWI) can also distinguish vascular etiologies from masses and structural injuries.

Acute management of brain stem syndromes is similar to that of with other brain strokes. The first step of management in patients with acute posterior circulation strokes is to assess the airway, adequate oxygenation and circulation, stabilize and resuscitate the patient. Once the patient is stable further work-up and treatment may be initiated. In addition of preventing further complications that could arise from swallowing difficulties, immobility, and cranial neuropathies and Corneal ulceration.

After treatment of the acute symptoms, it is important to work-up the underlying cause of the stroke. The mechanism of the stroke will affect preventative management for the patient. For example, anticoagulation will be needed in patients with atrial fibrillation.[1]

Intravenous tissue-type plasminogen activator (tPA) can be used in patients with strokes involving the brainstem if it is administered within the tPA window (e.g., 4.5 hours of symptom onset). However, in cases of acute basilar occlusion, acute endovascular therapy—which involves intra-arterial mechanical clot retrieval or lysis—can be considered due to the high risk of death or severe disability in the absence of recanalization. However, ongoing randomized controlled trials are currently being performed to investigate the value of early intra-arterial therapy in basilar occlusion as the indications and benefits compared to therapy with tPA are unclear.[1]

There are two main categories of vision problems that may be present after posterior circulation strokes:

Optical therapy utilizes mirrors and prisms to enhance the user’s visual field. In cases where diplopia does not resolve, an eye patch can be used to eliminate the perception of double vision.[18] These therapy modalities are strategies which help patients compensate and adapt to their visual impairment.

Visual restoration therapy (VRT) has been reported by Sabel and colleagues.[17] VRT employs the use of lights to stimulate the salvageable areas between the functioning regions and “blind” spots in the visual field. The theory behind the restoration therapy was that light could be used stimulate and strengthen the compromised neural pathways the are involved in visual processing.[17] However, a study in 2005 by Reinhard and colleagues found no significant improvement in the visual defects of patients who underwent VRT.[17] Currently, there are no therapies that can restore vision that has already been lost secondary to brainstem strokes. However, vision rehabilitation and low vision services are recommended.

Currently, there are no clinically proven interventions that can resolve or reverse the neuromuscular and visual processing impairments patients have after brainstem strokes.[17]

The prognosis of brainstem strokes are dependent on stroke severity, patient age, the degree of neurologic impairment, and the size/location of the infarction on neuroimaging with MRI or CT. The largest proportion of recovery occurs in the first three to six months after a stroke has occurred.[19]