The typical patient with MEWDS is a healthy middle aged female age 15-50. There is a gender disparity as women are affected with MEWDS four times more often than men. Roughly 30% of patients have experienced an associated viral prodrome. Patients present with acute, painless, unilateral change in vision. They may notice photopsias, dyschromatopsia, or a temporal or paracentral scotoma. Majority of the cases have unilateral involvement, but bilateral MEWDS has been described and is usually asymmetric.

Though the onset is acute, the disease is typically self limiting and recurrences are rare. Visual prognosis is excellent.

On fundus exam, one sees flat, multifocal, grey-white lesions (100-200 microns), appearing to reach as deep as the RPE. Typically lesions are found outside the fovea in the posterior pole. A characteristic finding in MEWDS is an orange-yellow fovea with granularity. One might also note optic disc edema, mild vitritis (usually posterior vitreous cells), mild anterior chamber flare, a relative afferent pupillary defect and an enlarged blind spot. Sheathing of retinal veins and superficial retinal hemorrhages are rarely seen. 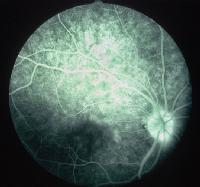 FAF is a quick and non-invasive method of establishing a diagnosis. Hyperautofluorescent dots correlate with the white dots seen on fundoscopy. Even in the absence of white dots on clinical examination, FAF can show characteristic hyperautofluorescent lesions. Recent reports suggest that FAF may be the most sensitive and practical ancillary test to detect MEWDS.

Discontinuities in inner segment-outer segment junction[2][3] and mild attenuation of external limiting membrane[2] have been reported in acute phase. Recurrent episodes may result in thinning of outer nuclear layer.[3]

An enlarged blind spot is typically seen. Other features include a central or paracentral scotoma. Acute Idiopathic Blind Spot Enlargement Syndrome may represent a form of the same disease process.

Changes are reversible. A reduced a-wave amplitude may be seen and early receptor potential may be prolonged.

A reversible decrease in Arden's ratio may be noted.

Visual evoked responses may show a reversible decrease in amplitude and prolongation of latency.

An infectious etiology is thought to be involved in the pathogenesis of MEWDS since frequently there is a viral prodrome. However, the exact pathogenesis is unknown. Since MEWDS is a self-limited disease, with almost all patients regaining good visual acuity within 3-9 weeks, no treatment is recommended. Photopsias and scotomata gradually resolve and the lesions will disappear and may be replaced by mild pigment mottling or chorioretinal scarring. MEWDS typically is a self-limited disease, however, patients with MEWDS may have persistent blind spot enlargement. While it is uncommon, 10% of patients may also experience a recurrence. That being said, the prognosis is quite good for these patients.