A choroidal detachment is defined by the abnormal presence of fluid in the suprachoroidal space, which is the potential space between the choroid and the sclera. It may occur in two types—serous and hemorrhagic. Serous choroidal detachments, also known as choroidal effusions, are a frequent complication of glaucoma surgery. 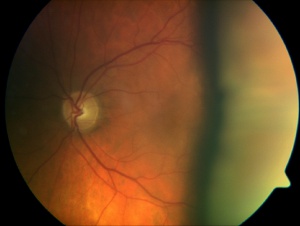 The most common cause of choroidal effusions is glaucoma surgery. Glaucoma filtering procedures may result in hypotony, particularly in the setting of over-filtration or a bleb leak. When hypotony occurs after glaucoma surgery, it results in pressure-driven osmotic shifts of serous fluid into the suprachoroidal space. Inflammation may also contribute by causing decreased vascular permeability. Once choroidal effusions develop, they may further exacerbate hypotony by reducing aqueous humor production.

In addition to glaucoma surgeries, choroidal effusions may also be caused by other intraocular surgeries. Further, they may result from trauma, inflammatory conditions, infectious processes, neoplasms, drug reactions, and disease states resulting in venous congestion.

No mortality has been reported.

Cyclitic pupillary membranes may develop. When a flat chamber is present, corneal endothelial damage and peripheral anterior synechiae can occur.

In hemorrhagic choroidal detachment, morbidity is the same as for serous detachment, but the prognosis is worse.

Loss of useful vision is reported in up to 40% of cases.

In a normal eye, the suprachoroidal space is essentially nonexistent because of close apposition of the choroid to the sclera. In pathologic conditions that disrupt the normal ocular fluid dynamics and hydrostatic and oncotic pressure gradients, fluid accumulates in this potential space.

These mechanisms suggest that choroidal effusions form either as a result of increased transudation through the choroidal capillary walls or from a drop in IOP caused by an increase in uveoscleral outflow of aqueous humor.

The best strategy for handling acute intraoperative choroidal effusions is to prevent them by minimizing hypotony and inflammation intra-operatively and post-operatively.

Pre-operative care: Pre-operative osmotics or carbonic anhydrase inhibitors can be used to decrease the IOP to a safe level before surgery. If it is medically reasonable to discontinue aspirin or anticoagulants in preparation for glaucoma surgery, then this should be done. However, the risk of choroidal effusion attributable to anticoagulant use is not yet clear.

During surgery:  Good scleral flap technique, appropriate thickness, multiple sutures on the flap to regulate aqueous outflow, use of cautery to achieve hemostasis, considerate use of antimetabolites, anterior sclerotomy to avoid the ciliary body, and adequate closure of the conjunctiva are all important measures to minimize intraoperative bleeding and hypotony during glaucoma surgery.

Drainage devices: For non-valved devices, the tube should be ligated with dissolvable polyglactin suture at the time of surgery, or two-stage surgery should be performed with the tube remaining in the subconjunctival space outside the eye and being placed into the anterior chamber at a later time. These techniques allow time for the formation of a fibrous capsule around the plate, avoiding excessive filtration in the early post-operative period and thereby minimizing hypotony and its related sequelae.

High-risk patients:  Prophylactic sclerotomies should be performed as a preventive measure in patients with nanophthalmos, Sturge-Weber syndrome, or previous postoperative choroidal effusions.

Post-operative care: Topical and systemic aqueous suppressants should be discontinued, and early laser suture lysis should be avoided.

Intra-operative hemorrhage is characterized by the development of positive pressure, visualization of an enlarging dark mass obscuring the fundus reflex, and tendency to extrude eye contents.

Post-operative hemorrhagic detachments are characterized by sudden, excruciating throbbing pain with an immediate loss of vision; both symptoms are almost pathognomonic.

Resolving inferior choroidal effusion in setting of improving post-operative hypotony. This patient is a 77M with POAG s/p Ahmed glaucoma valve OS.  Left:  B-scan ultrasonography (US) on post-operative day 3, with intraocular pressure of 4 by Goldmann applanation tonometry.  Right:  B-scan US at post-operative week 2.

Elevated in a four-lobed presentation because of firm attachments of the choroid to the vortex veins.

On echography, effusions are notable for their anterior angle and extension to the ora serrata. Ultrasonography offers a method for detecting a small accumulation of fluid in the supra-ciliary/choroidal space not readily apparent on clinical examination.

Choroidal effusions after glaucoma surgery are often managed conservatively, and the approach varies depending on underlying etiology.

Close observation of post-operative serous chroroidal detachment is frequently appropriate, as IOP may gradually rise. Most effusions resolve spontaneously if they are limited in size and duration. In this situation, they do not affect surgical prognosis or visual outcomes.

As soon as the diagnosis is confirmed, topical corticosteroids, cycloplegics, and mydriatics should be prescribed for patients.

Other treatments for an over-filtering bleb include application of a bandage contact lens, injection of a high-density viscoelastic, or use of compression sutures.

In the presence of inflammation, the eye is treated aggressively with topical or oral steroids. In the presence of over-filtration, steroids are tapered quickly or discontinued to promote bleb scarring. Cycloplegic agents are used to deepen the anterior chamber by rotating the ciliary body posteriorly.

Surgical drainage technique: The location of maximal fluid accumulation should be noted pre-operatively to determine the optimal drainage site(s). Steps of the procedures are listed.

Post-operative visits should include assessment of visual acuity, anterior chamber depth, and IOP, as well as careful evaluation of the choroidal detachment.

The prognosis is guarded. In general, a correlation exists between the severity and extension of the detachment and the prognosis.

Even with treatment, loss of functional vision can occur in 10-80% of patients.