Intraocular lens (IOL) implantation after refractive surgery is challenging because standard IOL power formulae can lead to significant unintended postoperative refractive errors. Special methods of IOL calculations should be used in these cases.

Current standard IOL formulae are the 3rd and 4th generation theoretic formulae such as the Hoffer Q, SRK/T, Holladay II, as well as the Barrett Universal II and Hill RBF formulas. The formulae use the corneal power in two ways. First, corneal power is directly used in the vergence calculation to predict the postoperative refraction. Second, corneal power is used in the prediction of effective lens position (ELP), which is the depth of the IOL relative to the cornea. Refractive surgery alters the corneal curvature and introduces error into both the measurement of corneal power and the prediction of ELP. Both types of error lead to an underestimation of the required IOL power in eyes that had previous myopic refractive surgery and an overestimation of the required IOL power in eyes that had previous hyperopic refractive surgery.

Radial keratotomy (RK) flattens both the anterior and posterior corneal surfaces, but only in a small central optical zone (Figure 2). The effective optical zone diameter can be significantly smaller than the measurement zone of standard keratometry. Therefore standard keratometry tends to overestimate the true corneal power. These corneas often have irregular astigmatism due to asymmetric incisions. Furthermore, there can be central flattening after cataract surgery due to corneal edema. Most of the flattening effect resolves over several months, but a residual hyperopic shift can persist for years. Therefore in post-RK eyes, the true corneal power can only be estimated by taking into account the small effective optical zone and postoperative hyperopic shift. 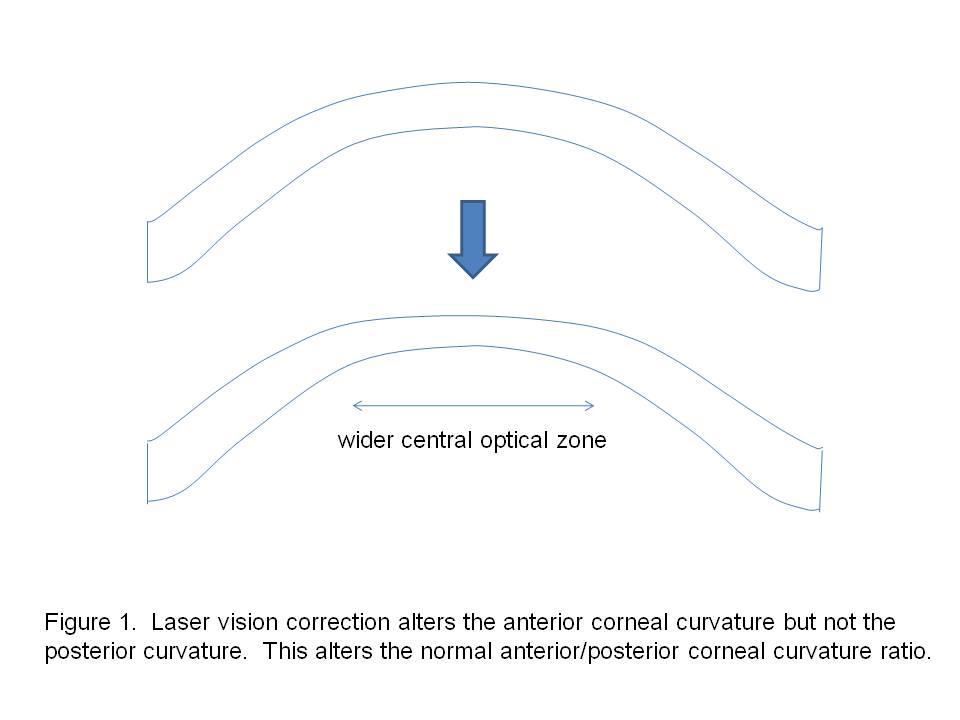 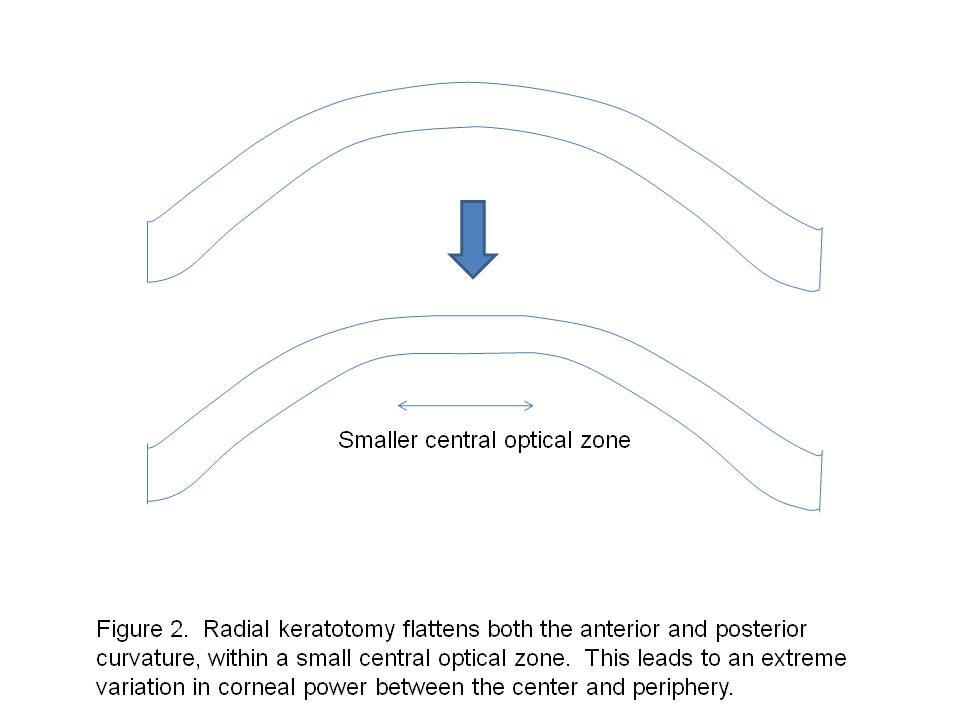 Standard IOL power formulae use the axial length and corneal power to predict the position of the IOL postoperatively. Refractive surgery changes the corneal power but not the depth of the lens, leading to an error in ELP prediction in the standard formulae. After RK and myopic LVC, the corneal power is decreased and the ELP estimates become too low. This leads to an underestimation of the IOL power that is required. Overestimation of IOL power occurs after hyperopic LVC. Special methods must be used to reduce this error.

Methods to Obtain the True Corneal Power after Refractive Surgery

This section describes the various methods for estimating or measuring the true corneal power after refractive surgery. The reader should note that some methods are suitable for post-LVC eyes, some for post-RK eyes, and some are applicable to both situations (Table 1). These estimates of the true corneal power are then used as input for IOL formulae that are specialized for post-refractive surgery cataract surgery.

This method theoretically yields the actual corneal power and is easy to calculate if the relevant data are available. Problems with this method include unavailability or inaccuracy of these data and interval changes in the corneal curvature or lens power and clarity (if the postoperative refraction is not available). Also, clinical history method is not suitable for RK because of unstable corneal power (Post RK cornea typically flattens progressively over many years).

The contact lens method was first described by Ridley [2]in 1948. Corneal power is calculated as the sum of the contact lens base curve, power, and over-refraction minus the spherical equivalent of the manifest refraction without a contact lens.

The advantage of this method is that the necessary equipment is inexpensive and readily available. The only additional step is to place the contact lens on the eye and repeat the refraction. This method is suitable for both post LASIK and RK corneas.

The accuracy of this method worsens with poorer best corrected visual acuity (BCVA). Therefore it is not suitable for cases of dense cataracts.

These regression formulas are based on analysis of post-LASIK corneal topography central Ks (TK) in LASIK eyes. True corneal power is predicted using only the single central postoperative reading TK. They are based on LASIK data and are not suitable for post-RK cases.

Awwad et al[5] reported that corneal refractive power after RK was best described by averaging the topographic corneal power of the central 3.0 mm area. Applying this method, together with a double-K IOL formula, achieved excellent IOL power predictability. This method may not be suitable for post-LVC cataract cases.

The fundamental solution to obtaining accurate post-LVC corneal power is to directly measure both anterior and posterior corneal curvature and thereby calculate the net corneal power. Several instruments can directly measurement of both anterior and posterior corneal surfaces. These methods include slit-scanning tomography, Scheimpflug photography, and optical coherence tomography. They are described below. These methods are being tested in post-LVC cataract surgery and may not be suitable for post-RK cases.

The Orbscan II videokeratography system (Bausch & Lomb, USA) combines Placido disk and slit-scanning technology to directly measure elevation and curvature of both the anterior and posterior corneal surfaces[6]. A limitation of Orbscan elevation maps is that intracorneal opacities may obscure imaging of the posterior cornea and introduce artifacts into total corneal power calculations. Additionally, the reliability of posterior corneal measurements with the Orbscan has not been fully established.

Pentacam (Oculus, Germany) is a rotating Scheimpflug photography system that can provide a topographic analysis of the corneal front and back surfaces as well as central corneal thickness. It generates a TrueNetPower map of the cornea as well as calculates an equivalent K called the Holladay Report. The equivalent K (at the recommended 4.5 mm zone) of the postoperative cornea has been proposed as an accurate measure of the true corneal power. [7] When clinical historical refractive data are not available, Pentacam provides an alternative method of measuring the central corneal power.

Optical coherence tomography (OCT) can be used to measure both anterior and posterior corneal power. It is particularly valuable when preoperative refractive surgery data are not available. Tang reported good repeatability and accuracy when using OCT to measure total corneal power[8] and IOL power calculation[9][10].

The following IOL power formulae and nomogram adjustments have been developed or tested in post-refractive surgery cases. The reader should note whether they are designed to take standard keratometry or true corneal power (see above) as input (Table 2). The reader should also note that some methods are suitable for post-LVC eyes, some for post-RK eyes, and some are applicable to both situations (Table 2). 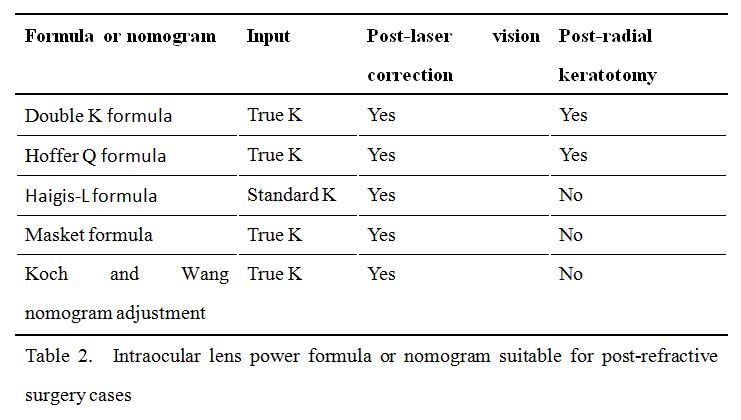 The Hoffer Q formula estimates a method of ELP calculation that is less sensitive to corneal power variation. Therefore it introduces less error in post-refractive surgery eyes than other single-K formulae[13]. If double-K formulae are not available, the single-K Hoffer-Q formula may be useful.

This formula is part of the built-in software of IOLMaster. Corneal power is calculated by inputting IOL-Master biometry as follows: axial length (AL), anterior chamber depth (ACD), and keratometry (corneal radii). This formula is a regression formula based on statistics. Accuracy may decrease if the eye is on the edge of normal distribution (high myopic or high hyperopic eyes). It is based on LASIK data and only suitable for post-LVC cases, not post-RK cases.

This method adjusts the power of the IOL, calculated using the postoperative measured data using the knowledge of the surgically induced refractive change. They recommend using the SRK/T formula for myopic ALs and the Hoffer Q for hyperopic ALs[14].

Koch and Wang made separate nomograms for both post myopic and hyperopic refractive surgeries. This nomogram is easy to use by just look up the axial length of the patient and add or subtract the adjusted IOL power to the IOL power calculated using the SRK/T, Hoffer Q, and Holladay 1 formulas[3].

Because there are many methods of calculating IOL power after previous refractive surgery, the cataract surgeon is faced with many choices. It is useful to obtain a consensus of several methods by computing the average or median recommended IOL power. Several IOL calculators (see Additional Rescources section below) provide an easy way to do this. When there is a wide range of recommendations (typically in cases of refractive surgery for high or extreme dioptric correction), it is wise to hedge in the direction of myopic results (choose higher IOL power or select lower corneal power estimation to use in IOL calculation).