Difference between revisions of "CMV Retinitis"

Cytomegalovirus (CMV) Retinitis is an acquired immunodeficiency syndrome (AIDS)-related opportunistic infection that can lead to blindness. CMV retinitis occurred with higher frequency prior to the advent of antiretroviral therapy, but has since been decreasing in well-developed countries, although still remains a prevalent condition in developing countries. It is a viral retinitis that can also be seen in patients who are immunosuppressed for other reasons aside from AIDS. 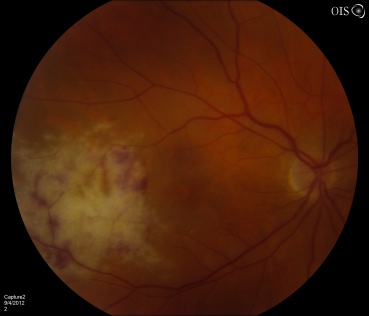 Cytomegalovirus (CMV) retinitis is an important ocular AIDS associated illness. It is a full thickness retinal infection that can lead to necrosis and retinal breaks and detachments.

CMV retinitis is caused by cytomegalovirus, a double stranded DNA virus in the herpesviridae family. It is often associated with HIV/AIDS and was extremely rare prior to the AIDS epidemic. It is also associated with severe immunosuppression from chemotherapy and autoimmune conditions requiring immunomodulators.

CMV retinitis has dropped in incidence and prevalence since the advent of HAART. The incidence has declined 55-99% and the odds of progression has reduced by 50% with HAART. Survival has improved from 0.65 years to greater than 1 year.

Patients with CD4 counts less than 50 cells/mm3 should be seen at least every 3 months to screen for CMV retinitis, as active retinitis is typically asymptomatic.

Diagnosis is largely clinical based upon the classic retinal findings and an immunosuppressive condition such as HIV; however, polymerase chain reaction (PCR) analysis of the vitreous or aqueous can further support the diagnosis. Differentiation from acute retinal necrosis/ARN is vital as treatment is different. 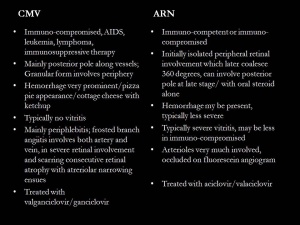 Patients present with decreased visual acuity and floaters. Some may present with flashing lights (photopsias) or blind spots (scotomata). One study showed 54% were asymptomatic.

Physical exam shows yellow white retinal lesions that often start in the periphery and follow the vasculature centripetally. However, it can start in the posterior segment. The classic findings are retinal hemorrhages with a whitish, granular appearance to the retina. Each lesion has the most activity in the borders. Vitreous signs of inflammation may be minimal as most patients are severely immunosuppressed. Very early CMV may resemble cotton wool spots, but with lesions larger than 750 µm, CMV must be considered. Three typical patterns have been described: a granular pattern, a fulminant/hemorrhagic appearance, or "frosted brach" angiitis.

Rhegmatogenous retinal detachment occurs in approximately one-third of patients when greater than 25% of the retina is involved. The presence of concurrent keratic precipitates in a stellate fashion can also suggest CMV uveitis. 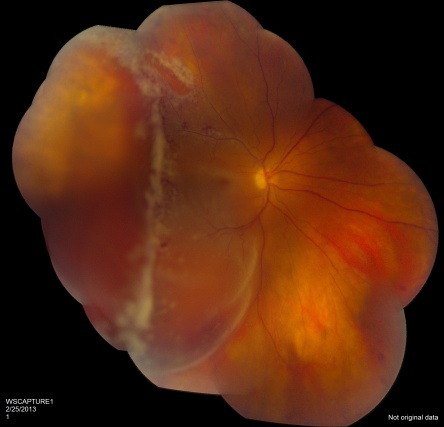 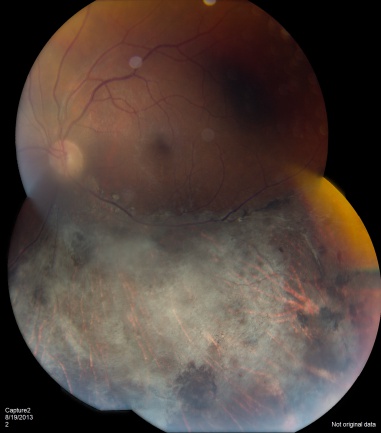 CMV retinitis can present as: 1. Fulminant - hemorrhagic necrosis on white/yellow cloudy retinal lesions. They may be centered around vasculature. 2. Granular - Found more often in the retinal periphery with little to no necrosis and hemorrhage. 3. Perivascular - The classic "frosted branch" angiitis showing white lesions surrounding the retinal vessels.

Most patients are asymptomatic, but may have floaters, flashes (photopsias), blind spots (scotomata). Pain and photophobia are uncommon.

The clinical diagnosis is made on history and classic retinal findings.

Diagnostic procedures can include aqueous or vitreous tap to test for CMV and other herpes viruses.

In cases of unknown retinitis, aqueous or vitreous tap and PCR analysis for CMV can be done. Serologic antibodies for CMV have not been shown to be helpful in diagnosis CMV retinitis-- a positive CMV antibody titer reflects prior exposure but does not diagnose the retinitis specifically, and a negative CMV antibody titer does not completely eliminate the chance of CMV retinitis, as patients who are immunosuppressed may not mount appropriate titers.

Early CMV can resemble cotton wool spots. It may be confused with HIV retinopathy, which is actually more common the CMV retinitis. HIV retinopathy occurs in 50-70% of patients and is characterized by intraretinal hemorrhages, cotton wool spots, and microaneurysms. For small lesions that are hard to differentiate from cotton wool spots, serial exams should be performed, which will show enlargement of the CMV lesions. Immunosuppression should be treated like a spectrum; some patients are more immunosuppressed than other individuals. For cases of minor immunosuppression, CMV retinitis may present as acute retinal necrosis (ARN) syndrome but follows a chronic course similar to CMV retinitis, which may cause misdiagnosis.

Management is largely medically based with intravenous (IV), oral, and intravitreal medications. Topical medications are not used. Management also hinges on HAART. If patients are on HAART, show healed lesion and two reports of CD4 6 months apart of > 100, they can be considered for discontinuation of CMV retinitis therapy.

Patients should be started on high dose induction therapy, which is followed by continuous maintenance therapy until CD4 counts increase, HAART is therapeutic, and CMV retinitis shows no progression.

There are at least 5 options for long-term therapy of CMV retinitis.

First line therapy is generally oral valganciclovir, which is a pro-drug of ganciclovir. The induction dose is 900 mg twice daily for 21 days followed by maintenance of 900 mg daily. Valganciclovir has increased bioavailability compared to oral ganciclovir and does not require IV administation, making it a favorite for patients and doctors alike. However, the cost of therapy is high and patient compliance can be a problem especially in developing countries. Should be avoided if hemoglobin is <8gm%,  absolute neutrophil count is less than 500 cells/µL, and the platelet count is less than 25,000/µL.

IV ganciclovir is given at 5 mg/kg twice daily for two to three weeks as induction therapy then followed by daily 5 mg/kg infusions. This can be quite cumbersome to patients.

Foscarnet is given at 90 mg/kg twice daily for two weeks followed by maintenance therapy of 90-120 mg/kg daily through IV infusion.

Oral ganciclovir can be considered for maintenance therapy but regression and involvement of fellow eye is more frequent.

Intravitreal ganciclovir, foscarnet, or cidofovir can be considered for short-term management.

In patients with immediately sight-threatening lesions (lesions close to the macula or optic nerve head), intravitreal injection of ganciclovir (2mg/injection) or foscarnet (2.4 mg or 1.2 mg /injection) or fomvirsen 330 micrograms, or cidofovir 20micrograms with concurrent systemic therapy can be done.

Depending on the medication used, complete blood counts, chemistries, and introcular pressure checks will be needed. Dilated eye exams should be performed daily to weekly initially, then 2 weeks after induction therapy, followed by monthly thereafter while the patient is on anti-CMV treatment. Fundus photographs can be helpful to detect early relapse.

Patients should be followed in an appropriate HIV clinic with CD4 counts and viral load studies.

The only initial surgical management involves intravitreal placement of intraocular ganciclovir devices. They have a relatively low risk profile and can last 6-8 months. They afford no protection to the fellow eye, however.

Surgery can also be performed for rhegmatogenous retinal detachments that occur, but post-operative visual acuity can be poor.

Look for complications of silicone oil especially cataract and glaucoma. Many patients are one-eyed and silicone oil may need to be left for long duration.

The most serious complication of therapy for CMV retinitis, besides those listed above due to medications is immune recovery uveitis (IRU). As the CD4 counts rise with HAART, it is presumed that reactions to CMV antigens cause anterior or intermediate uveitis. Cystoid macular edema and epiretinal membranes are also potential complications of IRU. Posterior capsular cataracts, proliferative vitreoretinopathy, and optic nerve neovascularization are possible complications as well. HAART therapy can also unmask CMV retinitis in a patient without prior CMV disease (unmasking CMV-immune recovery retinitis (IRR)) or can cause worsening of known CMV retinitis (paradoxical CMV-IRR).

CMV retinitis that involves > 25% of the retina can lead to rhegmatogenous retinal detachments from breaks that occur near thin, necrotic retina. Peripheral anterior retinal lesions are associated with increased risk of retinal detachment, due to the anterior adherence of the vitreous base.

The prognosis was almost uniformly fatal prior to the advent of HAART. Now it carries a much better prognosis, but even with HAART and anti-CMV therapy, mortality is still increased after diagnosis of CMV retinitis.