Brown syndrome is a vertical strabismus syndrome characterized by limited elevation of the eye in an adducted position, most often secondary to mechanical restriction of the superior oblique tendon/trochlea complex.

Previously referred to as "superior oblique tendon sheath syndrome," it was considered a dysgenesis of the superior oblique muscle's tendon sheath. More recently, it is thought that the problem is not the sheath, but rather the tendon itself, that undergoes increased tension.

Brown syndrome can be congenital or acquired, is unilateral in 90% of patients, and has a slight predilection for females. There is thought to be a genetic predisposition to congenital Brown syndrome, however, most cases are sporadic in nature.

Fundamentally, Brown syndrome results from a limitation of the normal function of the superior oblique tendon-trochlea complex. It most often occurs as a congenital condition. It has been proposed that congenital Brown syndrome is due to a dysgenesis of the muscle tendon or trochlea, and recent work suggests that some cases may be associated with congenital cranial dysinnervation disorders.

There is a large differential for secondary causes of Brown syndrome, including inflammation, trauma, tendon cysts, previous sinusitis, orbital tumors, and iatrogenic causes such as orbital or strabismus surgery. Abnormalities of the fascial anatomy is considered to be a rare cause. For uncertain reasons, Brown syndrome is more commonly found in the right eye than the left eye.

The diagnosis of Brown Syndrome is based on the clinical findings and history. Further workup may be needed in acquired Brown syndrome and often depends on the suspected underlying etiology. For example, workup for a suspected inflammatory etiology may require laboratory testing, while suspected trauma may prompt additional imaging.

Forced duction testing is very useful in the diagnosis of Brown syndrome, and will demonstrate restriction to passive elevation in adduction.

A tendon cyst or a mass may be palpable in the superonasal orbital. Brown Syndrome secondary to an inflammatory condition is frequently associated with orbital pain and tenderness on movement or palpation of the trochlea. 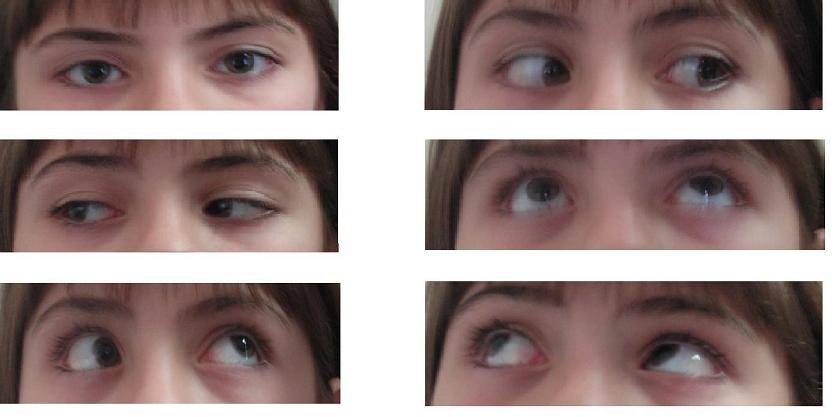 Patients with Brown syndrome may have a variety of symptoms which may be constant, intermittent, or recurring, including:

Brown syndrome should be differentiated from the following conditions:

Management of Brown syndrome depends on symptomatology, etiology, and the course of the disease.

Observation is often preferred, as symptoms are often intermittent in nature and do not cause permanent damage. Improvement of congenital Brown syndrome has been described in up to 75% of cases. Of note, as patients are most symptomatic on upgaze, normal growth can decrease symptoms as patients grow taller and have less necessity for upgaze position. Acquired Brown syndrome cases may also undergo spontaneous resolution, and thus early surgical intervention is not recommended.

Brown syndrome due to inflammatory disease with associated pain may transiently benefit from injection of steroids to the trochlear area. This may require recurrent treatments for symptomatic relief.

Systemic steroids and non-steroidal anti-inflammatory agents have also been utilized with variable success. Immunosuppressants (i.e. adalimumab) have been used in refractory cases.

Surgery can be considered in the following circumstances:

The following surgical procedures could be used: