Acute retinal necrosis (ARN) is an inflammatory condition which may present as panuveitis. The principal causative viral agents have been found to be Varicella Zoster Virus (VZV) as well as Herpes Simplex Virus (HSV-1 and HSV-2) via polymerase chain reaction (PCR) testing of intraocular fluid.

In 1971, Urayama and colleagues[1] of Tohoku University in Japan reported 6 cases of a syndrome characterized by unilateral panuveitis, vitritis, acute necrotizing retinitis, retinal arteritis, and rhegmatogenous retinal detachment. Young and Bird proposed the name of bilateral acute retinal necrosis.[2] In Japan, the naem 'Kirisawa-type uveitis' had been used for ARN.

ARN is believed to be caused by a viral infection. Most often the causative viral agent is either VZV or less commonly HSV. Older patients more often present with VZV or HSV-1 infections while younger patients more often present with HSV-2 infections. ARN has also been reported in case reports to be associated with cytomegalovirus (CMV) and Epstein-Barr virus (EBV), but there is limited evidence to suggest these viruses cause ARN.

Genetics are believed to play a role in an individual’s risk for ARN with antigen expression of:

Previous history of herpetic infection including encephalitis may be present.

This clinical entity is uncommon in the pediatric population.  Most often it affects healthy, immunocompetent adults in their fifth to seventh decade. A clear racial or gender predilection has not been consistently demonstrated.

There appear to be two distinct disease phases:

The use of systemic or intravitreal antiviral agents reduces the duration of the active phase of ARN and may thereby potentially minimize the duration and extent of retinal necrosis. Chronic use of antivirals (for 6 weeks to 3 months) after resolution of the active phase of ARN in one eye has also been shown to reduce the incidence of ARN in the fellow eye.

Prevention of the late visual sequelae of acute retinal necrosis, namely that of retinal detachment, may be partially reduced through prophylactic laser photocoagulation of the retina surrounding areas of prior retinitis or atrophy. However, retinal detachment may still occur/progress even after laser. Laser may be difficult in view of painful red eye, severe media haze due to vitritis, posterior synechia, and cataract. Also, laser over the necrotic, swollen white retina may cause iatrogenic breaks.

The diagnosis of ARN, prior to the advent of PCR, was originally made based on clinical criteria and the use of electron microscopy to identify viral particles in retinal tissue of enucleated eyes.

Most important characteristics are vitritis, occlusive retinal arteriolitis, and peripheral retinitis which becomes confluent in late stages. Compared to cytomegaloviral retinitis, the vitritis is extensive, retinitis is peripheral and hemorrhage is less. 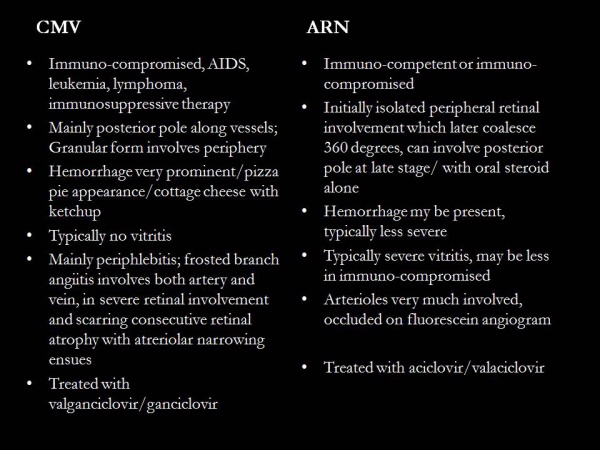 The American Uveitis Society established the following as diagnostic criteria: 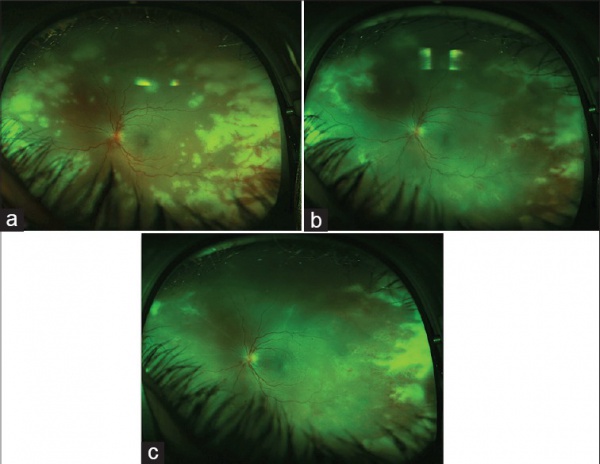 The diagnosis of ARN is usually made based upon clinical characteristics. However, it may be appropriate to analyze an aqueous or vitreous sample to test for presence of members of the herpesvirus family, especially in atypical or difficult diagnostic cases. Rarely, diagnostic vitrectomy or endoretinal biopsy may be necessary.

The following tests may be performed on aqueous or vitreous samples for further diagnostic certainty:

Without intervention, the active phase of the disease can last between 6-12 weeks, while treatment with antivirals and/or steroids may reduce the latency to 4-6 weeks. Treatment of ARN is complex and should be individualized based on overall clinical picture and vitreoretinal findings. Prospective, randomized controlled trials have not been performed given the rarity of the disease; thus, treatment recommendations are based on case reports/series. Treatment modalities may include antiviral, anti-inflammatory, and antithrombotic therapy in cases with ischemic optic neuropathy, as well as laser photocoagulation for retinal detachment prophylaxis or surgery for retinal detachment repair.

Antiviral therapy can be administered systemically (intravenously or orally) as well as via intravitreal injection. Prior to the mid-1990’s, intravenous (IV) administration of antiviral agents (usually acyclovir) was carried out for at least the first week after diagnosis of ARN because it was believed that higher serum and intraocular concentrations of the antiviral agent could be achieved; thereafter, it was considered appropriate to transition the patient to oral antivirals (acyclovir, famciclovir, valacyclovir, or valganciclovir) for an additional 4-12 weeks. With the advent of newer antiviral agents, many physicians now advocate the use of oral antiviral agents such as famciclovir, valacyclovir or valganciclovir as initial induction agents for treatment of ARN. Renal function should be monitored while patients are on systemic antivirals. Intravitreal delivery of antiviral agents is also common practice. The use of steroids and antithrombotic therapy (i.e. Aspirin) is controversial and may be used at the treating physicians’ discretion. Steroids may be started under the cover of antivirals and should never be started alone in the stage of acute retinitis.


Commonly used systemic antiviral agents include the following which can be tapered slowly over months following resolution of the acute herpetic phase of ARN:

Steroids may have a beneficial therapeutic effects if initiated 24-48 hours after the start of antiviral therapy or once regression of retinal necrosis been demonstrated:

Aspirin may minimize vascular thrombosis and propagation of further retinal ischemia and necrosis. Topical steroid drops and cycloplegics have also been shown to be beneficial, depending upon the degree of anterior segment inflammation. Topical antiviral therapy has been shown not to be efficacious in treatment of ARN.

Patients with unilateral ARN should be closely followed with dilated examination of both of their eyes. Approximately 50-75% of patients with ARN will go on to develop a retinal detachment. Reports of second eye involvement range from 3-35%, with variable involvement attributable to etiologic agent, course of therapy, and immune status. The antiviral therapy reduces the duration of active disease and reduces the chance of involvement of the fellow eye. However, the retinal detachment may not be reduced by antiviral therapy.

Some retina specialists advocate the use of prophylactic laser along the posterior margin of the junction of necrotic and non-necrotic retina to prevent incidence of retinal detachment. The rates of success in preventing retinal detachment are variable, and consensus does not exist on whether laser demarcation should be employed. This may be due to the confounding fact that eyes in which laser can be successfully performed typically have optically clearer vitreous, less inflammation, and thereby less risk for developing retinal detachment.

Vitrectomy with or without use of scleral buckle, with either gas or silicone oil tamponade, is usually reserved for those cases in which traction-rhegmatogenous retinal detachment occurs.

Many cases finally have less than 20/200 due to

The visual outcome of eyes affected by ARN is variable and largely depends upon vision at time of presentation as well as whether or not secondary retinal detachment or ischemic optic neuropathy occurs. Development of retinal detachment depends upon the extent of retinal necrosis present at the time of diagnosis, the amount of vitritis overlying areas of retinal necrosis (with more vitritis associated with a higher risk of RD), and varying response to treatment regimens.