Acute zonal occult outer retinopathy (AZOOR) is a retinal disease first described by Gass in 1992; reporting on 13 cases that shared the following features: rapid loss of one or more large zones of outer retinal function, minimal fundus changes, electroretinographic abnormalities, and permanent visual field loss that was associated with delayed development of visible atrophic changes in the pigment epithelium [1].

There has been a predominance of Caucasians, but the disease has been seen in all ethnic groups.

The majority of patients are young females in their mid-thirties [2][4][5].

Hypothesis circle around the possibility of a systemic autoimmune disease (due to the female predominance and greater than normal susceptibility to develop autoimmune diseases)[6] or a viral infection (infectious agents entering the receptor cells at the optic nerve head and ora serrata could be responsible for the zones of receptor cell loss)[7]. However; the reduced photoreceptor cell responses on electroretinogram (ERG) testing demonstrate that the abnormalities are centered on the level of the retinal pigment epithelium (RPE)-photoreceptors complex[5].

Mahendradas et al[8] reported a case of a 23 year old male diagnosed with AZOOR (FFA, visual field perimetry and ERG testing was performed), revealing polycythemia on a complete blood count test. Antiphospholipid antibodies were negative while levels of factor VIII C were elevated. Visual symptoms improved within 24 hours of initiating treatment with antithrombotic therapy and undergoing venesection. The authors conclude that thrombotic events may play a role in causation of AZOOR.

The majority of patients will complain of sudden decreased vision with a scotoma related to the zone of outer retinal dysfunction alongside the presence of photopsia (described as “scintillating” or “shimmering” lights). Some patients may report a viral infection preceding the symptoms[2][4][5][9].

The disease may progress to involve the second eye. A report of 51 patients followed for a median of 8 years demonstrated that 61% had unilateral involvement at onset; but 76% progressed to bilateral involvement by the final examination. The involvement was delayed by a mean of 50 months[3].

Visual acuity is usually minimally affected early in the disease. The anterior chamber is quiet. Vitreous cells may be present, but are usually minimal. The fundus initially appears normal followed by retinal atrophy and mottling of the RPE in the areas involved as the disease progresses. The arterioles attenuate[2][3][4].

A classification of AZOOR based on clinical fundus and multimodal imaging was proposed[10]: 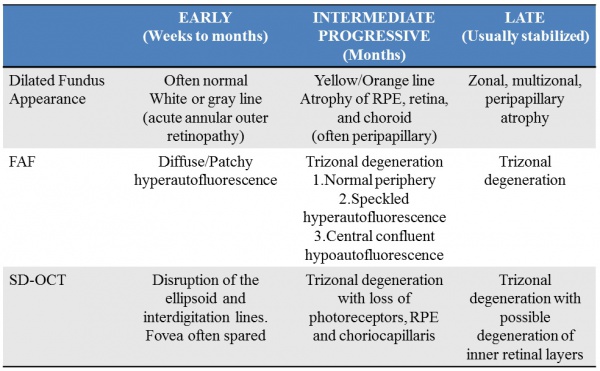 Classification Based on Multimodal Imaging 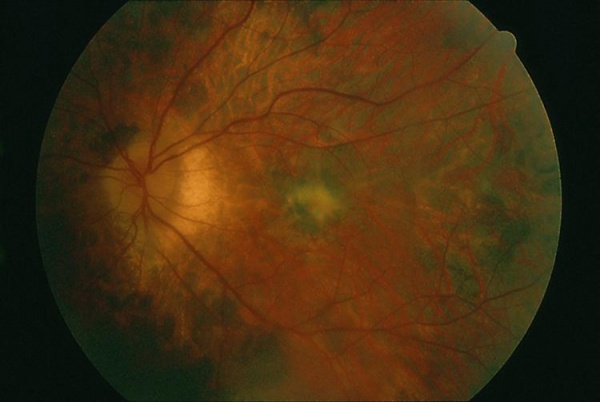 A wide variety of visual field defects may be observed. The most common presentation will be the enlargement of the blind spot which may be associated of central scotomas[2][3].

Initially we may be presented with a normal exam. Window defects and abnormalities of the RPE will be evident as the disease progresses[2][4].

Extremely useful in defining the areas of retinal involvement and may offer a way to monitor for signs of progression of the disease[4][12]. FAF documents the presence and distribution of lipofuscin in the RPE cells; a decrease in autofluorescence indicates loss or damage to the RPE cells[12].

Mrejen et al mention a trizonal defect appearance on FAF which also manifests themselves in ICG and OCT. Normal autofluorescence can be observed in the area outside of the delineating line (zone 1), speckled hyperautofluorescence could be seen within the AZOOR lesion (zone 2), and hypoautofluorescence was present indicating choroidal atrophy (zone 3)[10].

May appear normal or show hypofluorescence in the area involved[2][4].

Late stage AZOOR may also show a trizonal pattern. Outside of the AZOOR lesion was a normal zone (zone 1). Inside the AZOOR line, minimal late extrachoroidal leakage was present (zone 2). Hypofluorescence with the absence of leakage corresponding to choriocapillaris atrophy represents zone 3 [10].

The lesion demonstrates the absence or irregularity of the photoreceptor’s ellipsoid line (formerly known as the inner and outer segment junction) and the interdigitation line (formerly known as cone outer segment tips) in the areas of retinal involvement. Chronically, atrophy of the RPE and thinning of the retina may be seen with the outer nuclear layer followed by thinning of the inner nuclear layer[4][10][13].

A trizonal appearance can also be seen on OCT. Testing was normal outside the AZOOR line (zone1). Inside the AZOOR line, multifocal material was present in the subretinal space (zone 2). Photoreceptor, RPE and choroidal atrophy are evident in zone 3)[10].

Despite the suspicion of only focal involvement, Francis et al[14] discovered evidence of generalized dysfunction affecting the cone system and RPE. Delayed electroretinogram (ERG) implicit time of the 30-Hz cone flicker response was demonstrated on all patients. On the electro-oculogram (EOG), a reduction in the light rise was present[2][14].

No proven treatment exists. Systemic corticosteroids, immunosuppressive drugs (cyclophosphamide, methotrexate, azathioprine, etc.), antiviral (acyclovir and valacyclovir) and antibacterial (sulfadiazine and trimethoprim) medications have been tried with no consensus on the success of said therapies[2].

Nakao et al[15] present a case of a 31 year old male diagnosed with AZOOR. He received no treatment and after two months presented spontaneous remission. The patient was closely monitored with spectral-domain OCT, multifocal ERG and imaging with prototype adaptive optics scanning laser ophthalmoscopy (AO-SLO). Patient was tested at the initial visit and at one month intervals for two months, showing gradual improvement until the parameters were nearly normalized.

Chen et al [17] demonstrate the favorable outcome of systemic steroids in a retrospective study involving nine patients who had a mean follow-up duration of 47 months. Three patients received intravenous pulse therapy (methylprednisolone 250 mg/q6h for 3 days) as initial treatment followed by oral prednisolone with gradual tapering for 3 months. Five patients received a standard dosage of oral prednisolone (1 mg/kg/day) with gradual tapering for 3 months. One patient initiated with oral prednisolone, but couldn’t be tapered due to reactivation of the disease. She was maintained on 10 mg/day and mycophenolate (immunosuppressant) 360 mg bid. At the final follow-up visit all patients had improvements in visual field and OCT testing.

Due to the rarity and insufficient documented long term cases of AZOOR, it is difficult to characterize the progression and prognosis of this disease.

Stabilization has been reported to have occurred within 6 months in the majority of patients (77-90%) after the initial progressive decline early in the disease[2][3].

Saito et al[11] also noticed in their study of 32 Japanese patients that the visual field parameters stabilized at the 6 month period, with only 2.6% continuing to worsen at the final visit (median of 31 months).

However; Hoang et al[18] report a case of a 55 year old female patient followed-up for thirteen years. Patient was treated with acyclovir and immunomodulatory drugs (periocular and systemic steroids, and cyclosporine) with no change in the progression of the disease. On her last follow-up; severe visual field constriction was noted secondary to diffuse chorioretinal atrophy.