Abducens nerve palsy is the most common ocular motor paralysis. The abducens (sixth) cranial nerve controls the lateral rectus muscle, which abducts the eye. Abducens nerve palsy causes an esotropia due to the unopposed action of the antagonistic medial rectus muscle. The affected eye turns in toward the nose and is unable to abduct properly. The deviation is constant and is usually greater at distance fixation than at near. The esotropia is also worse when the patient is looking toward the affected side. 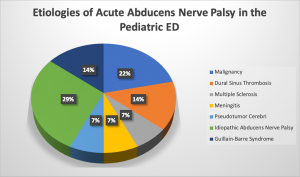 Because the greatest motility deficit occurs on attempt to abduct the palsied eye, palpebral fissure widening upon abduction may be seen with maximal abduction effort. The patient may also present with a head turn toward the affected eye, to keep their eye opposite the field of gaze of the affected lateral rectus muscle and thereby avoid or minimize diplopia.[21] It is important to differentiate isolated sixth nerve associated abduction deficit from a gaze palsy or INO as this would localize the lesion to the nucleus/internuclei of the 6th and 3rd nerve.[22]

Diplopia is the most common presenting symptom. Patients will have horizontal uncrossed diplopia which is greater at distance than at near. The diplopia is also worse in the direction of the palsied muscle and gets better in the contralateral gaze (incomitant). In recent onset palsies, the deviation measures greater when the paretic eye is fixating and smaller when the nonparetic eye is fixing (primary and secondary deviations).

In cases of abducens nerve palsy due to raised intracranial pressure, patients may experience associated symptoms of headache, pain around the eyes, nausea, vomiting, or pulse synchronous tinnitus. Low ICP from a CSF leak can also cause abducens palsy and can present with symptoms of headache and can hence present clinically very similarly to raised ICP.[23] MRI brain and orbits can sometimes help distinguish between high and low ICP. If a patient has a lesion causing the abducens nerve palsy which affects other structures in the brain, other neurologic signs may be observed.[24] In the event of subarachnoid hemorrhage, the patients can present with leptomeningeal irritation and present with cranial nerve palsies.[25]

If the etiology of the abducens nerve palsy is a brainstem lesion affecting the sixth cranial nerve fasciculus, there may be associated ipsilateral facial weakness, contralateral hemiparesis, or sensory abnormalities. If the abducens nerve palsy presents together with other ipsilateral cranial nerve palsies, etiology could be a lesion involving the meninges, superior orbital fissure, orbital apex, or cavernous sinus.

There is a limitation to abduction in the affected eye. Abducens nerve palsy causes an esotropia due to the unopposed action of the antagonistic medial rectus muscle. The affected eye turns in toward the nose and is unable to abduct properly. The deviation is constant and is usually greater at distance fixation than at near, and also greater when the patient is looking toward the affected side.

There is no universal consensus about diagnostic relevance of MRI in abducens nerve palsy. In general, if unilateral abducens nerve palsy presents acutely, MRI could be performed, especially if there is no evidence of vasculopathic risk factors. Some clinicians may prefer to routinely perform MRI in all patients with abducens nerve palsy, even with evidence of vasculopathy.[26] Another study by Murchison and others in 2011 analyzed cost-effectiveness of MRI imaging as it related to lesions found and affected courses of treatment, and determined that it may not be medically necessary to perform MRI on every patient with an isolated cranial nerve palsy.

However, according to a 2017 review by Elder et al, the most recent input to the MRI debate was a 2013 prospective study of 109 patients > 50 years old with isolated ocular motor neuropathies who received MRI. An etiology other than ischemia was found in 16.5% of patients, including brainstem infarction, petroclival meningioma, and cavernous sinus B cell lymphoma. Due to the possibility of dangerous diseases presenting with an isolated cranial motor neuropathy, the authors recommended MR imaging even if a microvascular cause is suspected. The authors stress that high-resolution brain and orbital MRI with gadolinium, fat suppression, and thin coronal and axial cuts through the orbits are necessary, as sixth nerve palsy mimics (e.g. thyroid eye disease) may be missed by a standard MRI brain.[27]

Treatment depends on etiology of the abducens nerve palsy. In general, underlying or systemic conditions are treated primarily. Most patients with a microvascular abducens nerve palsy are simply observed and usually recover within 3-6 months. Treatment for the diplopia associated with abducens nerve palsy can be managed with prisms, occlusion, botulinum toxin, or surgery.[31] Occlusion using Bangerter filter or pirate patch can eliminate diplopia and confusion, prevent amblyopia or suppression in younger patients, and decrease the possibility of ipsilateral medial rectus contracture. Base-out Fresnel prisms can be used to help the patient maintain binocular single vision in the primary position, but are not usually useful due to the incomitance of the deviation. Botulinum toxin injections to the medial rectus of the affected eye are sometimes used to prevent secondary contraction of the medial rectus, or during transposition procedures to weaken the non-operative muscle. In general, surgical intervention is reserved for patients who have had stable orthoptic measurements for at least 6 months.

Strabismus surgery can be performed for persistent abducens nerve palsies that demonstrate stable measurements over a 6-month period.[32] Forced duction test is performed in the office or in the operating room in order to assist with surgical planning. Often, a resection of the affected lateral rectus and recession of the ipsilateral medial rectus (recess/resect or “R and R” procedure) is performed. Alternatively, a resection of the affected lateral rectus with a recession of the contralateral medial rectus may be performed.

Various forms of transposition surgeries can be considered (e.g., Jensen, Hummelsheim, Augmented Hummelsheim with resections +/- Foster modifications, Knapp's procedure). Botulism toxin injections to the medial rectus of the affected eye can also be used as a temporizing treatment.

The prognosis for sixth nerve palsy depends on the underlying etiology. Rush and Younge reported a recovery rate of 49.6% in 419 non-selected sixth nerve palsy cases, and a higher rate of 71% in 419 patients with diabetes mellitus, hypertension, or atherosclerosis[33].