The Role of Cornea in Glaucoma Management: Central Corneal Thickness and Corneal Hysteresis

The Role of Corneal Hysteresis in Glaucoma Management

Corneal hysteresis (CH) is the only widely used in vivo measureable biomechanical property. CH reflects the viscous damping ability of the cornea. It is measured by the Ocular Response Analyzer (Reichert, Corp., Depew, NY, USA) and has been shown in several studies to predict the progression as well as response to therapy in primary open angle glaucoma (POAG). The aim of this article is to review the role of CH in the management of POAG. 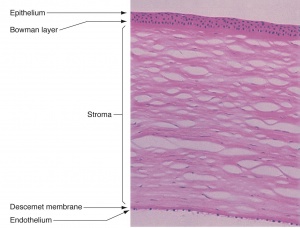 Figure 1.Structure of the Cornea: http://www.aao.org/image/epithelium © 2015 American Academy of Ophthalmology

Whereas corneal thickness is a static physical property, corneal biomechanics refers to the dynamic behavior of the cornea. The clinically relevant biomechanics of the cornea can be understood by two material properties, i.e. elasticity and viscosity.[1] Both elasticity and viscosity are mechanical properties that describe how a material deforms (“strain”) in response to an external load (“stress”). An elastic material, such as a spring, regains its original position by following the exact pathway of its initial displacement after removal of the external force. The slope of the stress-strain plot defines the elasticity modulus, or Young’s modulus, of a material. Conversely, a viscous material does not follow the exact path of deformation to regain its original shape upon removal of the stress.[2]

The cornea exhibits both elastic and viscous properties that can be explained by the two constituents of its stroma: collagen fibers and the ground substance.[3] Collagen fibers are the main load-bearing substance and provide elasticity whereas the ground substance, composed of glycosaminoglycans (GAGs) and proteoglycans (PGs), offers viscosity. Given its viscoelastic nature, the cornea absorbs and dissipates energy as heat during a stress-strain cycle.

When attempting to measure corneal biomechanical properties, it is important to note that the cornea is a dynamic, viscoelastic, and structurally heterogeneous material. Therefore, any measurement of corneal biomechanics will be affected by the amount and the rate at which the stress is applied, the location of the cornea where the measurement is made, the IOP, as well as the age.[4][5][6]

The in vivo measurement of corneal biomechanics was first made possible in 2005 with the advent of the Ocular Response Analyzer. The ORA is based on bi-directional noncontact applanation pneumotonometry (Figure 2A).[7] An accelerating air pulse is generated by the ORA to slightly indent the cornea. Two pressure measurements, P1 and P2, are recorded within 20 milliseconds using an electro-optical system that detects infrared light reflected from the cornea while applanated during its inward and outward movement (Figure 2B). P1 and P2 are not the same due to the viscoelastic properties of the corneal stroma. The average ((P1+P2)/2) and the difference (P1-P2) of these two measurements are recorded as Goldman-correlated IOP (IOPg) and corneal hysteresis (CH), respectively. CH is a reflection of viscous damping (see Corneal Biomechanics above) within the corneal stroma that is providedo by glycosaminoglycans and proteoglycans. 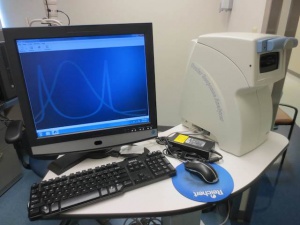 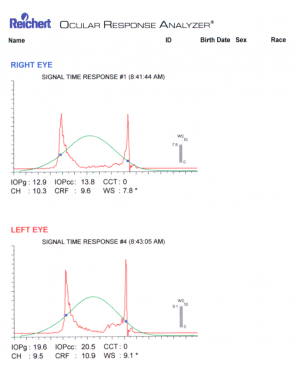 Two other parameters obtained during an ORA measurement are corneal-compensated IOP (IOPcc) and corneal resistance factor (CRF). IOPcc is derived from an algorithm based on pre- and post-LASIK data and is considered to be less affected by the cornea. CRF is a measure of the cornea’s overall resistance related to elastic properties of the cornea and is not associated with CH. The precise meaning and application of IOPcc and CRF is not completely understood.[3]

ORA measurements have been shown to be repeatable and highly consistent.[8] The ORA software generates a reliability indicator called “waveform score” for each measurement. This should be taken into account when interpreting ORA data, with a waveform score of <3.5 suggesting an unreliable measurement.[9] A normal tear film is important for a proper reflected light signal and accurate ORA measurement.

Corneal hysteresis (CH) is a biomechanical property that reflects the viscous damping ability of the cornea. Hysteresis, from Greek meaning “lagging behind”, is the difference between how a material deforms and reforms during loading and unloading from an applied force. It is a property of materials that combine elasticity and viscosity. Two analogies that can be used to understand viscoelastic materials as well as hysteresis are memory foams and automotive suspension systems. Both have coils that provide elasticity as well as shock absorbers to provide viscosity. Unlike simple spring that would respond in a linear fashion during a stress-strain cycle, these products have an initial resistance during loading and a delay during unloading.[10]

Similarly, corneal stroma consisting of glycosaminoglycans and proteoglycans is viscoelastic and has hysteresis. This allows the cornea to absorb and dissipate energy during a stress-strain cycle when a force is applied. CH is not an inherent property of the cornea, but rather reflects how the cornea reacts to an external force.

Impact of Corneal Thickness and Intraocular Pressure on Corneal Hysteresis

Central Corneal Thickness (CCT) and intraocular pressure are two important factors to be considered when assessing corneal hysteresis. In healthy patients, there is a strong positive correlation between CH and CCT. By comparison, there is a positive but much weaker correlation between CH and CCT glaucoma patients.[15] In healthy patients, there is a thicker cornea with healthy stroma and more viscous substance, i.e. GAGs and PGs, which results in a higher viscous damping ability.

IOP is negatively correlated with CH such that the higher the IOP, the lower the CH. La Place’s law, which states that wall tension is a function of internal pressure, can help understand this concept.[2] As IOP increases, the cornea becomes stiffer and its damping ability reduces.[16] It is therefore important to account for CCT and IOP to isolate the effect of CH, both in clinical settings as well as in research studies.

Impact of Age, Gender, and Race on Corneal Hysteresis

Viscous substances responsible for corneal hysteresis (CH) decrease with age resulting in lowering of CH over time.[1][17][18] The rate of CH decline over time has been estimated to range from 0.24 to 0.7 mmHg/decade in normal eyes.[11][19][20] Though some studies demonstrated CH to be lower in African Americans compared to Caucasians, others have not found a statistically significant difference between these two populations independent of CCT.[21][22][23][24] Gender, axial length, spherical equivalent, and myopia have no significant effects on ORA measurements.[25][26]

Several cross sectional studies have shown corneal hysteresis (CH) to be lower in eyes with primary open angle glaucoma (POAG) compared to normal eyes, with mean CH values in POAG ranging from 8 to 10 mmHg (Table 1).[15][27][28][29][30] Similarly, CH has also been shown to be lower in normal tension glaucoma (NTG) when compared to normal eyes, but higher in NTG than POAG eyes. Based on different studies, the difference in CH between POAG and normal eyes ranges anywhere from 1 to 2 mmHg. It has also been reported that CH values can discriminate between normal, POAG, and ocular hypertensive/glaucoma suspect eyes. In addition, CH was recently shown to decline at a faster rate in POAG compared to normal eyes.[11] 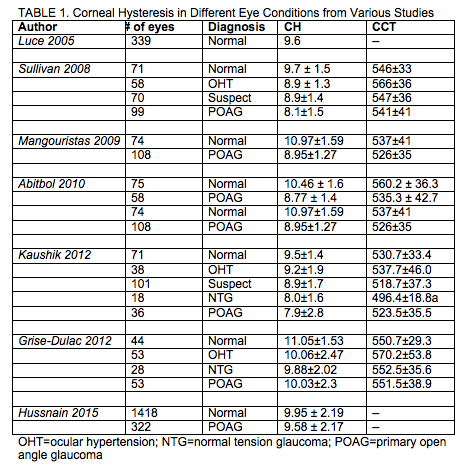 Given the cornea’s continuity with the lamina cribrosa, corneal hysteresis (CH) is proposed to be marker of overall globe biomechanics and to predict optic nerve head (ONH) susceptibility to glaucomatous damage. This hypothesis is supported by several studies demonstrating a correlation between CH and ONH structural changes in glaucoma. Higher CH, but not CCT, has been shown to be correlated with more optic nerve surface compliance during artificially induced IOP elevations in the eyes of glaucoma patients.[31] This suggests that eyes with higher CH may be better able to tolerate IOP spikes. Conversely, CH is significantly lower in POAG patients with acquired pit of the optic nerve – a change indicative of glaucomatous damage – than those who do not have such changes.[32] Other structural markers of the optic nerve such as cup-to-disc ratio and Heidelberg Retina Tomograph (HRT) rim area are also associated with CH.[33][34]

The data suggests that CH may either directly contribute to the pathogenesis of optic nerve damage in glaucoma or may serve as a surrogate marker for overall globe biomechanics. A definitive link between CH and ONH damage, however, is not yet established, with other studies showing no correlation between CH and RNFL thickness or cup-to-disc ratio.[35][36]

Corneal hysteresis (CH) has also been shown to be associated with functional changes in glaucoma. Congdon et al. were the first to show that low CH, but not CCT, was associated with progressive visual field loss in glaucoma patients over 5 years.[37] Medeiros et al. recently demonstrated in a prospective study that for each 1 mmHg decrease in baseline CH, there was 0.25% faster rate of visual field index decline over time in glaucoma patients.[38] In addition, in POAG patients with asymmetric visual fields, the worse eye had lower CH.[39]

Corneal hysteresis (CH) has an inverse relationship with intraocular pressure (IOP), i.e. CH rises as IOP drops, and vice versa. This phenomenon has been demonstrated with various IOP lowering therapies including topical prostaglandin analog, tube shunt, as well as trabeculectomy.[40][41] Lower CH was shown to result in a higher IOP lowering response in patients being treated with prostaglandins and selective laser trabeculoplasty (SLT).[42][43]

Corneal hysteresis (CH) is lower in glaucoma and has been shown in various studies to be more strongly associated with structural and functional changes in glaucoma compared to central corneal thickness. In addition, CH has also been shown to predict glaucoma progression and response to glaucoma therapy. For this reason, despite our lack of understanding about the true nature of this variable, it is an important clinical measurement that can help risk stratify and set therapy goals for glaucoma patients.