Bradley R Straatsma et al[2] first described Straatsma syndrome in 1979 in a case series of 4 patients exhibiting unilateral MRNF in association with myopia, amblyopia, and strabismus. In a series of 3,968 consecutive autopsy cases, Straatsma and colleagues reported that MRNF were present in 0.98% of patients and in 0.54% of eyes examined, with bilateral involvement in 7.7% of patients. Multiple distinct lesions were found in the same eye in 12% of specimens

First described by Virchow in 1856,(1) myelinated nerve fiber appears at fundoscopy as white striated opacities, following the distribution of retinal nerve fibers. They are usually benign (2) and diagnosis is usually made by chance. In some cases it can be associated with other conditions, such as neurofibromatosis and vitreoretinal disorders.(3) Patients are usually asymptomatic, but a few cases can present significant visual abnormalities, in special axial myopia and amblyopia, configuring the Straatsma Syndrome. We report a case of a 60 years old female patient with this rare syndrome.

Myelination of retinal nerve fibres (MRNF) is rare, with an estimated occurrence of approximately 1% in all autopsied eyes, and 0.3%-0.6% in routine ophthalmic outpatient department.[5] MRNF can be associated with multiple clinical pathologies, such as myopia, amblyopia, and strabismus, as well as other systemic conditions. However, in the majority of patients MRNF is an incidental stagnant findings. A few cases have reported progression of the disease.[6] The pathogenesis of this condition is not fully understood: myelination starts at the 5th month of pregnancy, and it is complete before birth. The lamina cribosa acts as a barrier for the myelination.

MRNF appear as white lesion usually contiguous with the optic nerve head. The distribution is along the retinal nerve fiber layer and typically feather like appearance is noted at the margin. The MRNF does not cross the horizontal raphe. MRNF may be separate from the optic disc and may be present in the peripheral retina.

Despite some controversy in its diagnostic features, it should be included in the differential diagnosis of leukocoria and must be suspected in the presence of refractive errors with anisometropia[7] 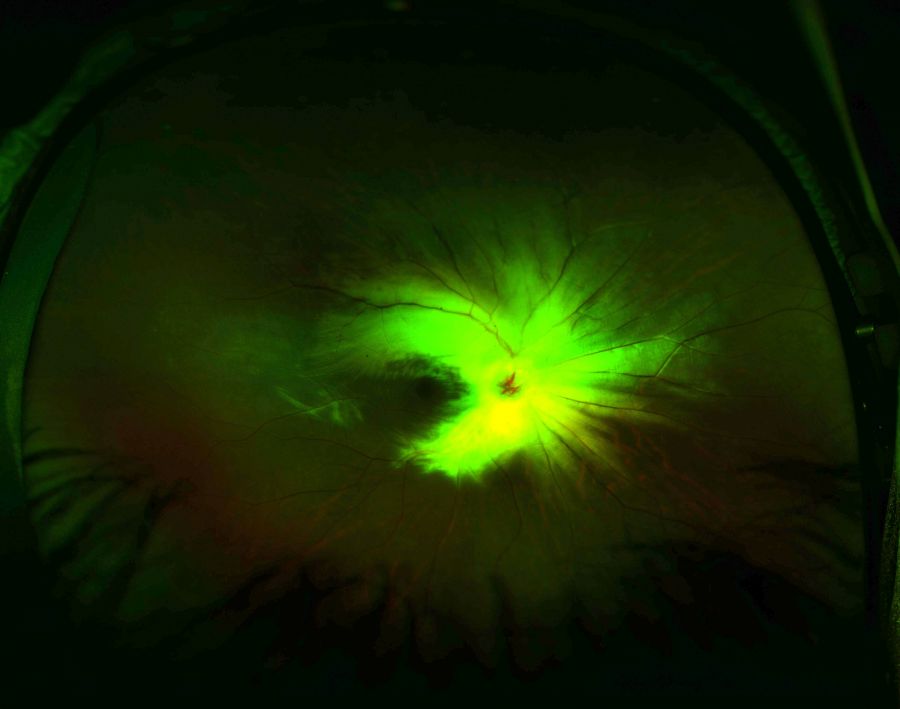 Visual prognosis of amblyopia associated with myelination of retinal nerve fibers and anisometropia is poorer than anisometropic amblyopia without myelination. It is well known that the former is refractory to occlusive therapy. Despite having a poor prognosis, visual rehabilitation should be attempted.