Ophthalmologists and neurologists are often required to evaluate patients in varying degrees of consciousness. This article focuses on the ocular findings present in comatose patients that can be used to localize deficits, diagnose pathology, and prognosticate for possible recovery.

Coma is a state of prolonged unconsciousness during which a person is alive but unresponsive to all external stimuli, noxious or otherwise.[1] Coma is typically caused by significant injury to the brain. The many etiologies of a comatose state include trauma, stroke, brain tumors, severe hyper- or hypoglycemia, prolonged cerebral hypoxia, seizure, and toxins.[2] While individuals in such a state have lost their ability to think and their awareness of their surroundings, they retain non-cognitive functions and a normal sleep pattern.[3] Many people gradually recover after coma but others may enter a persistent vegetative state or die. The outcome largely depends on the cause, severity, and site of the neurological damage. Those who survive may emerge with lasting physical, intellectual, and physiological deficits that require special care.

Coma is a medical emergency that requires timely and appropriate action to preserve life and brain function. This EyeWiki describes the neuro-ophthalmic findings in coma including lid, pupil, motility, and ophthalmoscopic findings.

The primary goals of the neuro-ophthalmic exam are to help determine the etiology, localization, and severity of a coma. The severity of a coma can be assessed with the Glasgow Coma Scale (GCS). GCS assesses eye-opening response, verbal response, and motor response and classifies patients with either severe, moderate, or mild brain injury. A patient with a GCS score below 8 is generally considered to be in a coma. The exam is sometimes limited by factors such as drug use, alcohol intoxication, and shock.[4]

Brainstem function should also be assessed if the patient is in a coma. Depending on the level of brainstem dysfunction, respiration patterns such as Cheyne-Stokes respiration, Kussmaul’s breathing, and central neurogenic hyperventilation can be observed. Cranial nerve assessment (including ophthalmoplegia, anisocoria, and ptosis) is also helpful for localizing brainstem lesions. In addition, vital signs such as bradycardia and widened pulse pressure in addition to papilledema or sixth nerve palsy can be indicative of increased intracranial pressure, contributing to brain herniation.[4] Focal findings can be suggestive of a structural lesion (e.g., hemiparesis, aphasia, conjugate eye deviation, and unilateral hypo- or hyperreflexia).[4]

Despite its clinical localizing value, the neuro-ophthalmic exam on comatose patients has certain limitations. Firstly, many patients are given sedatives prior to the time of evaluation, often to facilitate intubation. Sedation can dampen neurological responses and thus lead to exam findings that are misattributed to brain damage. An important exception is the evaluation of pupil size which remains a highly sensitive test despite sedation.[5] Furthermore, early on in emergency situations, healthcare workers may not have a complete medical history of the comatose patient. This can cause abnormalities in the ocular exam to be attributed to acute brain damage when in fact they are due to preexisting neurologic or metabolic disorders or pharmacologic agents such as opioids. This can lead to a misdiagnosis and subsequent inappropriate management of the patient.[5] Additionally, interobserver variability in the ocular evaluation of comatose patients has been observed in multiple studies.[5][6][7] Finally, some of the individual components of the exam have their own limitations. Testing for the oculocephalic reflex requires a stable spine while caloric testing requires an intact eardrum.

Voluntary eye movements are tested by passively opening the eyes of the patient and observing for any purposeful eye movement. Any purposeful movement in an otherwise unresponsive patient should be checked for catatonia, locked-in syndrome, or a feigned coma. If a complete lack of voluntary eye movement response is noted then brainstem involvement should be evaluated using the doll’s head maneuver.[4] Activation of the vestibulo-ocular reflex (VOR) with passive rotation of the head tests the integrity of the brainstem nuclei and infranuclear ocular motor pathways. An intact VOR (normal doll’s head maneuver) suggests a supranuclear cause for the coma.

Visual pursuit can be tested with an object, preferably a mirror, in front of the patient’s eyes. The object is moved in the horizontal and vertical plane to evoke evidence of visual tracking. Smooth visual pursuit of a moving object requires attention and voluntary behavior; therefore, evidence of smooth visual pursuit suggests a minimally conscious state rather than a vegetative state. Cortical blindness (afferent visual loss) can produce impaired voluntary pursuit but should not affect the movement of eyes to command or to VOR stimulation (i.e., doll’s head maneuver).[10][11] 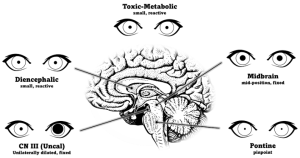 Pupillary responses and their localization in comatose patients

Blink-to-threat is performed with rapid hand movement toward the patient’s eyes from different directions to elicit a blink reflex. This test may have some utility in comatose patients to assess the presence of afferent input (i.e., intact vision).[10][12]

The pupillary light reflex is easily tested and can help with localizing the cause of the coma. To perform this test, first, observe the pupil size in ambient and dim lighting for anisocoria. Shine a bright light into one eye and then alternate between each eye, observing both pupils for any reactivity. Note if the pupils react briskly, sluggishly, or have no response. Swinging the flash light from one eye to the other can detect a relative afferent pupillary defect.

A normal pupil examination includes equal sized (i.e., isocoric) pupils in light and dark illumination; normal direct and consensual pupillary constriction to light stimulus; round and regular pupils; an intact near stimulus (requires voluntary effort), and the absence of a RAPD.

Before proceeding with this test, ensure that the patient has a stable cervical spine. During the test, the patient’s eyelids are held open, and the head is briskly rotated from side to side. It is important to rotate fast enough to overcome pursuit. A positive reflex is seen when there is conjugate eye movement in the opposite direction of head rotation, with a gradual return to midline position.[10] This positive finding demonstrates that CN III, VI, VIII, corresponding nuclei in the midbrain/pons, and the vestibular system are intact bilaterally. A negative finding, as seen with eyes in the midline position moving in the same direction as head rotation, similar to a doll’s eyes, suggests brainstem dysfunction from the level of the midbrain to the pons.[18]

Before proceeding with this test, ensure the patient has an intact tympanic membrane. A small amount of fluid (water or air), either 7oC over (warm) or 7oC under (cold) the bodily temperature, is flushed into one of the ear canals. A positive finding will show conjugate horizontal nystagmus; however, the direction of the nystagmus is dependent on the relative temperature of the fluid. Warm fluid will cause the fast phase of nystagmus to be towards the irrigated ear, while cold fluid will cause the fast phase to be away from the irrigated ear.[19] One study showed that a positive finding in a comatose patient is a strong predictor (PPV=0.93) for emergence from a vegetative state.[20] Another study showed that the absence of a vestibulo-ocular reflex predicted 100% of cerebral death.[21] Similar to the oculocephalic reflex, a negative finding indicates a deep metabolic coma, vestibular damage, or brainstem dysfunction from the level of the midbrain to the pons.

When a tactile stimulus, such as a cotton ball, is applied to the surface of the cornea, bilateral blinking indicates the presence of the corneal reflex. A positive corneal reflex in both eyes demonstrates that CN V, VII are intact bilaterally. The absence of a reflex may indicate a lesion of CN V, VII, and/or the pons, but can also be caused by weakness of the orbicularis oculi muscle or ocular pathology.[22]