The Kestenbaum capillary number index is defined as the number of capillaries observed on the optic disc. The normal count is approximately 10. In optic atrophy, the number of these capillaries reduces to less than 6, while more than 12 suggests a hyperemic disc. [1] Kestenbaum's sign consists a quantifiable measure of the vascular profile of the optic disc, which can aid to quantify the degree of optic nerve atrophy, as well as the diagnosis of borderline optic atrophy.[2]

Kestenbaum's index was initially described in 1947 by Alfred Kestenbaum as a method to quantify the degree of optic atrophy. [2]The original reference describes the technique to perform the test; “In order to set a numerical value on the degree of atrophy, the vessels which pass over the margin of the disk may be counted. One starts at the twelve o'clock point and counts all vessels crossing the margin, counting separately the arterioles, the veins and the small vessels. “Small vessels” means the vessels which cannot be recognized as arteries or as veins. The number of vessels passing over the margin in normal eyes is fairly constant. Without dilatation of the pupil, usually 9 large vessels (4 or 5 veins and 4 or 5 arteries) and about 10 small vessels can be seen.”

Optic nerve atrophy develops as result from dysfunction and subsequent axonal degeneration at the optic nerve head, most commonly due to glaucomatous optic neuropathy and optic neuritis. Presence of optic nerve pallor has traditionally been considered a hallmark of optic nerve damage resulting in atrophy. The etiology of optic atrophy can often be difficult to establish. One study claimed that retrospective review of history and examination findings typically explain the etiology, when initially the diagnosis was unexplained, whereas neuroimaging is only diagnostic in approximately 20% of cases. This further demonstrates the relevance of clinical examination and the need for basic observation. [2]

In chronic open-angle glaucoma, disease progression is associated with vascular dysregulation in the form of local vasospasm and systemic hypertension . The surface of a healthy optic disc contains a large number of capillaries which are derived from branches of the retinal arterioles and are continuous with the peripapillary retinal capillaries.[2] These retinal capillaries are supplied by the central retinal artery, unless a cilioretinal artery is present, in 5–40% of patients. Kestenbaum's sign provides a quantifiable measure of the vascular appearance of the optic disc and would further support the contention that end stage disease has a underlying vascular etiology.[2] 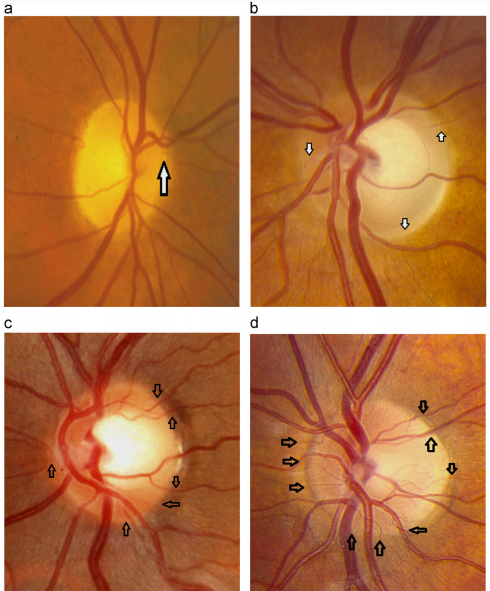 (A) Kestenbaum's sign in severe optic atrophy. A score of 1 highlights severe disease. (B) Kestenbaum's sign in borderline optic atrophy. The optic disc here may be passed as normal. However, if the number of small vessels traversing the disc margin (which are not obviously arteries, veins or branches thereof) is counted, only 2–3 (arrowed) can be scored, which is well below the normal level of 9–10. (C) An early glaucomatous disc with a Kestenbaum score of 6. (D) A healthy optic disc. A large number of capillaries can be counted (Kestenbaum score: 9–10). Their course from disc surface arterioles to peripapillary retinal capillaries is evident. Source : Hawkes ED, Neffendorf JE. Kestenbaum׳s capillary number test--a forgotten sign? Mult Scler Relat Disord. 2014 Nov;3(6):735-7. doi: 10.1016/j.msard.2014.09.087. Epub 2014 Oct 7. PMID: 25891554.