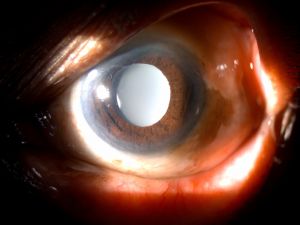 Intraocular lens (IOL ) Opacification is an uncommon but serious complication of cataract surgery. It can cause significant deterioration of visual performance and may necessitate IOL explantation and exchange 1. Clinical identification and evaluation of this condition is important as a misdiagnosis may prompt surgeons to perform unnecessary interventional procedures such as Nd YAG capsulotomy or vitrectomy resulting in complications 2. A better understanding of the risk factors can also help in avoidance of opacification. 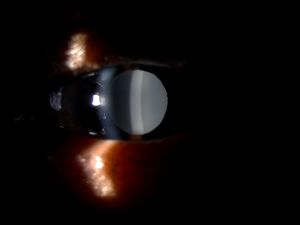 Based on many literature reports, it has been noted that opacification can occur in different ways depending on the time period and the IOL materials

Usually caused by precipitation of crystalline deposits on the IOL's surface, which can be related to the viscoelastic substance or the balanced saline solution11,12 used in the procedure. There are recent reports of acute intra operative clouding of hydrophilic and hydrophobic IOLs which could be caused by sudden changes in temperature13.  The acute clouding was transient and resolved in a few hours after the procedure.

There are reports of silicone IOL opacification due to hydration (brown haze) and also due to the interaction of hydrogel material with dyes or the viscoelastic used during surgery14. 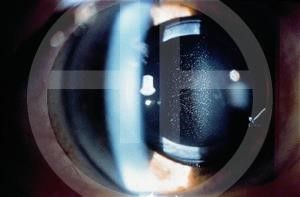 Glistenings are fluid-filled microvacuoles( 1- 20 µm) that form within the intraocular lens (IOL) optic when the IOL is in an aqueous environment. It is more commonly seen in hydrophobic IOLs and forms as a result of thermal changes rather than structural changes4,15.

Calcification is due to precipitation of calcium and phosphate on and/or within the IOL and  is more frequently seen with hydrophilic IOLs.

Neuhann et al. suggested three main groups of calcifications16: primary—related to IOL itself (properties of the polymer, it’s surface or IOL packaging), the secondary calcification can occur as a result of diseases or pathologies that causes the disruption of BAB and pseudocalcification when false positive staining of calcium occurs. However, usually, calcification is a multifactorial problem.

Werner et al. proposed possible causes of calcification after surgeries that require exogenous gas or other substances injection into the eye17 . In these cases, calcification is confined to the central area of optic. Injected gas, air, tissue plasminogen activator, silicone oil can have direct contact to IOL surface. Secondly, it can be related to a metabolic change in the anterior chamber due to the presence of the exogenous substance and lastly—exacerbated inflammatory reaction with the breakdown of BAB caused by the surgical procedure itself.

Snowflake degeneration is a slowly progressive opacification of PMMA IOLs due to prolonged exposure to ultraviolet radiation. It affects the central region of IOL and leaves the periphery relatively free of the deposits due to its protection by the iris18,19.

Opacifications of the IOL optic may cause reduced visual acuity, decreased contrast sensitivity and glare. Glistenings specifically do not appear to cause a significant decrease in visual acuity but could degrade vision by inducing glare symptoms.

AS-OCT(Anterior segment-Optical Tomography) helps in detection of presence, location and density of calcification20,21.Very superficial changes are more difficult to detect in this way.

IOL exchange is the only therapeutic option in symptomatic patients with opacified IOL.

IOL Exchange can be associated with zonular dehiscence(ZD), posterior capsular rupture(PCR) or corneal decompensation25.The adherence of most deposits is extremely strong and Nd:YAG laser treatment is often proven to be ineffective in the cleaning of the lenses' surfaces and unnecessary laser capsulotomy in eyes with opacified IOLs may also increase the complication rate during the IOL exchange procedure26. It was reported that 33% of IOL exchanges require an anterior vitrectomy, this can increase to 48% with a previously performed Nd:YAG capsulotomy27 and even jeopardize ‘in the bag’ implantation of IOL2 . Cases of postoperative recurrent cystoid macular edema, retinal detatchment and choroidal haemorrage following IOL exchange have been reported in patients with IOL opacification, misdiagnosed as PCO and treated initially with Nd:YAG Capsulotomy. Errogenous diagnosis as vitreous haemorrage or haze can lead to unnecessary vitrectomy . In such a case, IOL exchange complicated by post operative endophthalmitis has been reported.