The identification of a retinal tear is imperative to the successful repair of a rhegmatogenous retinal detachment. There are many factors that may lead to difficulty in identifying a retinal break and on occasion, despite detailed clinical examination pre-operatively and intra-operatively, an occult break may not be able to be identified. Retinal breaks are not found in 2.2% to 4% of phakic RDs[1]. In aphakic and pseudophakic RDs, the incidence of non-visualized breaks is higher, reported as 7% to 16% and 5% to 22.5%, respectively[2]. Fortunately, there are multiple surgical techniques that can be employed to assist in trying to identify an occult tear.

2. Factors that may impair identification of a retinal break:[3] 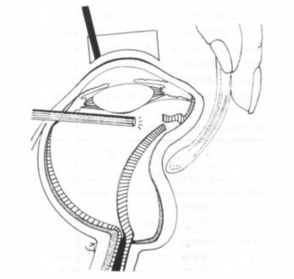 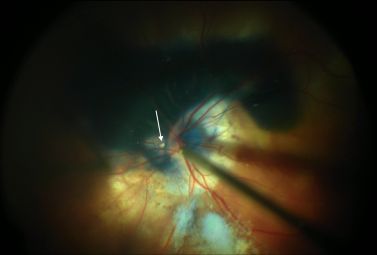 Figure 2: Intra-operative photo showing peri-papillary leakage of trypan blue in an 82 year old male who presented with worsening vision of the right eye due to a total retinal detachment. Intra-operative indented search did not identify any peripheral or equatorial breaks so a modified sequence of DE-TECH was employed. Prior to PFCL, aspiration at the disc revealed blue-stained schlieren. This confirmed the location of a peripapillary hole, masked by a steep staphyloma and peripapillary atrophy. This case demonstrates the utility of DE-TECH for detecting occult posterior breaks as well as the importance of checking at the disc either before or after introducing PFCL.

This technique is particularly useful for identifying breaks located near the ora serrata and was first described by Rosen et al (Figure 1). It involves deep kinetic indentation of the sclera combined with endoillumination during closed microsurgery[4]. The active entry sites for endoillumination and vitrectomy are generally made opposite the upper borders of the horizontal recti. This maximises the angular range to ensure full inspection of the retina as the endoilluminator can then be used in either entry sites.

This is defined as an optical inhomogeneity within transparent media. It is seen as a distortion called a ‘streak’ or ‘plume’[5]. These streaks are observed when light passes through incompletely mixed fluids with different refractive indices.

During vitreous surgery, the vitreous humor is typically replaced by an aqueous solution whose density and refractive index differ from those of subretinal fluid. The observation of schlieren during vitrectomy therefore suggests the presence of subretinal fluid and a retinal hole. However, if the retinal break is still not seen, this phenomenon can be further applied in multiple techniques used to try identify an occult retinal break.

Heavy liquids such as perfluoro-n-octane (C39F41) can be used alone to try vent subretinal fluid out of a retinal break and allow its visualisation through the schlieren phenomenon. This technique has varying reports of success with Martinez-Castillo et al. only able to identify breaks in 11 of 25 eyes using this technique.6 This is likely due to the often small size of occult retinal breaks and therefore only a very small volume of subretinal fluid able to stream out[6].

DE-TECH involves the injection of trypan blue (TB) into the subretinal space. This increases the contrast of the streaks of dye against the vitreous infusate so it is easier to identify. The dye may also stain devitalised tissue present around the site of the break[7]. Extrusion of the dye stained subretinal fluid is then further encouraged through the subsequent use of perfluorocarbon liquid (PFCL) to fill the eye.

There are two techniques that have been previously described to place the dye into the subretinal space: transretinal and transscleral. In the transretinal method, TB was injected into the post-equatorial subretinal space using either a 41-G needle or through a posterior retinotomy using a 20-G soft-tipped cannula.[7][8] Transscleral injection involves injection of the dye into the most bullous portion of the retinal detachment using a 30-G needle mounted on a 1mL syringe and the needle tip placed against the globe like an indenter, bevel orientated away from the sclera.[9] Upon injection of the dye, dynamic scleral indentation is then performed to try and vent the dye out of the undetected break.

There has been a small number of studies looking at the utility of this technique, particularly, its efficacy of break detection, with success rates ranging from 80-89%.[7][8][9]    Suggested reasons for occult breaks being missed when using this technique include the possibility that breaks may evade detection with this technique if there is an adjacent break which offers lower resistance to flow or the possibility of loculating sub-retinal fluid between areas of retinopexy and the PFCL liquid thereby allowing exclusion of breaks in a section of detached retina.[7]

Disadvantages of this technique include the potential for toxicity of the retina if not all dye is removed from the subretinal space. Other potential risks include iatrogenic break creation if a transretinal approach is used or risk of choroidal haemorrhage and hypotony if using a transscleral approach.

Cryotherapy has been described as technique to identify retinal breaks through its ability to induce changes in retinal opacity.[3] This was described by Griffith et al. where cryotherapy was applied in two confluent rows between the ora and equator in the region of the suspected area. They then noted that the small breaks could be temporarily rendered opaque as they were being engulfed by the cryotherapy-induced ice ball, termed as the “immediate cryotherapy test.”[10] Furthermore, the break was seen more clearly a few minutes later as the retina developed a light grey change, termed as the “delayed cryotherapy test.”[10]This occurs due to the contrast with the freeze-induced opaque retina surrounding the break, making it much more visible.

Direct endoscopic visualisation during pars plana vitrectomy is a technique described in 2011 by Kita and Yoshimura.[11] This involved standard 20-gauge 3-port pars plana vitrectomy with the use of a fibre optic endoscope as the light source. Once vitreous removal was performed, shaving of the vitreous base and detection of retinal breaks was completed using the endoscope only, without scleral indentation. This technique was able to identify occult retinal breaks in 19 of 20 patients without any complications reported. The advantages to this technique include the ability to produce large and clear images, as well as the ability to observe the retina without manipulation of the anterior chamber or scleral depression, which can often cause subsequent proliferative change or post-operative inflammation.[11]