The bimatoprost implant (Durysta, Allergan, Irvine CA, USA) was approved by the Food and Drug Administration (FDA) on March 5th, 2020 for reduction of intraocular pressure (IOP) in patients with open-angle glaucoma (OAG) or ocular hypertension (OHTN). The implant is the first sustained release therapy to be approved for this purpose.

Bimatoprost belongs to the prostaglandin analog (PGA) drug class and has been shown to lower IOP by increasing aqueous humor outflow via both the conventional trabecular route as well as the uveoscleral route[2]. Results from a study of normotensive beagle dogs that received the bimatoprost implant (30ug) suggest that the agent may also increase aqueous humor outflow by decreasing episcleral venous pressure[3].

The bimatoprost implant is preloaded within a sterile applicator with a 28-gauge needle tip. Under aseptic conditions, the practitioner inserts the needle into clear cornea, enters the anterior chamber, and then depresses an actuator button to release the implant. Following release of the implant, the needle is removed and the patient is instructed to sit upright for at least one hour.

The implant then will rest in the inferior anterior chamber angle [FIGURE]. 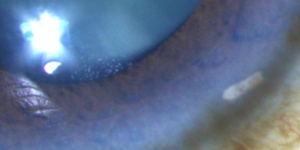 Lowering of IOP is the only proven method to decrease risk of development and/or worsening glaucomatous optic neuropathy. Topical medical therapy is an effective strategy, but several barriers exist to long-term treatment. The bimatoprost implant has been shown to be efficacious and relatively safe. The implant addresses an area of need in glaucoma management.