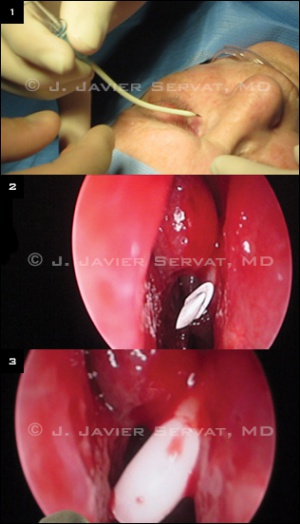 EARLY STEPS. (1) A 12-gauge shielded intravenous catheter is bent approximately 30 to 45 degrees. (2 The IV catheter is positioned between the nasal septum and the lateral nasal mucosa. (3) The metal needle is removed, leaving only the plastic sheath in position.

Conjunctivodacryocystorhinostomy CDCR with the insertion of a glass (Jones) tube changed the management of canalicular obstruction. Before this development, management options for proximal obstruction included canalicular stenting with polyethylene tubes or reiterative probing, both of which had poor success rates.

Canalicular obstruction may be caused by trauma, surgery, systemic chemotherapeutic agents (such as fluorouracil or docetaxel), topical antiglaucoma medications (including dorzolamide, pilocarpine, and timolol), and antiviral drops (such as idoxuridine and trifluridine).

Canalicular obstruction can be caused by a multitude of issues including trauma, infection or cicatricial conditions. In cases were systemic chemotherapeutic agents are used, extensive fibrotic changes with evidence of keratinization and marked epidermalization of the surface epithelium, have been shown.[3]

In cases were the canalicular stenosis is secondary to chemotherapeutic agents, bicanalicular silicone intubation early in the course of disease may prevent additional scarring and reduce the need for CDCR.[4]

All patients should have a careful slit-lamp examination and an evaluation of other causes of ocular irritation. Special attention should be paid to the conjunctiva and caruncular area for signs of inflammation, symblepharon, or infection. A previously placed medial tarsorrhaphy or any abnormality of the eyelids secondary to trauma or resection of tissue may require correction prior to CDCR and the placement of a Jones tube.

Severe septal deviation, hypertrophic middle turbinates, and masses should be evaluated and treated prior to endoscopic CDCR. In addition, a deviated nasal septum can make endoscopic surgery difficult or impossible to perform. If not enough space is available, a septoplasty will be required.

Canalicular obstruction is an accepted indication for endoscopic CDCR. When canalicular stenosis is present, silicone stenting can be attempted. If the results are unsatisfactory, then an endoscopic CDCR is indicated.

Uncommon indications include severe lacrimal pump failure, which may occur with Bell palsy and other causes of facial paralysis, and tear hypersecretion, as in cases of aberrant regeneration.

Advantages of endoscopic CDCR over conventional CDCR include the following: 1) minimal or no postoperative ecchymosis and edema; 2) less surgical manipulation of medial canthal tissues; 3) no skin scarring; and 4) better placement and more accurate length selection of the Pyrex tube. The lack of tissue manipulation is particularly important in the healing process, as it improves the chance that a properly placed tube will remain in the correct position.

Endoscopy also allows an accurate assessment of potential problems. These include a tube that is too short and is at risk of being covered by mucosa, a tube that is too long and touching the nasal septum, or a prominent middle turbinate, which may touch the distal end of the tube. If the latter is the case, a partial turbinectomy should be performed to avoid mucous membrane overgrowth and tube occlusion.

To begin, the nasal cavity is packed with gauze soaked in a 4 percent cocaine solution; this packing is removed after five minutes. Under direct visualization with a 0-degree rigid endoscope, local injection of an anesthetic is administered to the submucosa of the anterior middle turbinate and lateral nasal wall. This anesthetic consists of lidocaine/ epinephrine (2 percent lidocaine with 1:100,000 epinephrine) mixed 50:50 with bupivacaine/epinephrine (0.5 percent bupivacaine with 1:200,000 epinephrine). The nasal cavity is repacked for an additional five minutes with gauze that has been soaked in the 4 percent cocaine solution.

Under endoscopic visualization, the middle turbinate may be gently infractured with a blunt periosteal elevator. The mucosa overlying the lacrimal fossa is then cauterized with monopolar cautery. A periosteal elevator is used to scrape the mucosa from the underlying bone. Any remaining mucosa is removed with Takahashi forceps. A Kerrison bone rongeur is used to create an osteotomy.

A track for the glass tube is then created. A 12-gauge shielded intravenous catheter is bent approximately 30 to 45 degrees at its midpoint. The catheter enters the middle of the caruncle. The needle is visualized with the endoscope as it enters the nasal cavity. The metal needle is then removed, leaving only the plastic sheath in position. A 6-inch long piece of 18-gauge wire is passed through the plastic sheath, and the sheath is removed, leaving only the wire in position. The wire acts as a guide for the glass tube placement. The tube is placed over the wire and pushed into proper position.

At this point, the length and position of the tube are checked with the endoscope. The tube is then secured into position with a 6-0 double-armed silk suture. The suture is wrapped twice around the proximal end of the tube. Both needles are brought from the tube through the skin. The needles are passed through a small piece of sterile rubber band to secure the tube in good position.

There are multiple options for tubes. Historically, a Jones tube has been used. There are now frosted (Gladstone-Putterman) or tubes with flanges (Stop Loss Jones Tube) that can be used to minimize dislodgment or migration of the tube.

NEXT. (4A) A piece of 18-gauge wire is passed through the plastic sheath. (4B) The sheath is then removed, leaving only the wire in position. (5) The tube is placed over the wire and pushed into proper position.

The patient should be instructed to avoid blowing his or her nose for the first week after surgery, as it can cause intranasal bleeding. During the initial three to six months postoperatively, the patient should place a finger over the tube in the medial canthal area during sneezing, nose blowing, or coughing to prevent dislocation of the tube. Once the medial canthal tissue has contracted around the tube, there is less chance of displacement.

Patients are usually seen one week, six weeks, and three to six months following surgery. During these visits, tube function can be measured by irrigating the tube.

To assess drainage, which is classified as Class I through IV, instill a drop of water over the medial canthus with an irrigating cannula. In Class I drainage, the water drains spontaneously. In Class II drainage, the water drains with nasal inhalation. Class III drainage is present when the water will not drain with respiration, but the tube can be irrigated. Class IV drainage is present when no irrigation is possible through the tube. In cases of Class III and IV drainage, an endoscopic nasal examination is indicated.

Extrusion of the tube is the most frequent complication, with many requiring additional revision within 5 years. Malposition, infection and obstruction of the tubes have also been reported, and remain lifelong possible risks. [5]