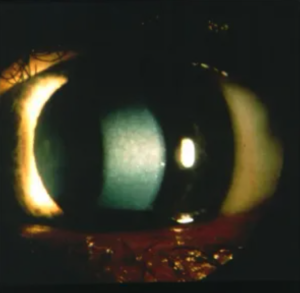 Central cloudy dystrophy of François (CCDF) is a rare corneal dystrophy with an unknown inheritance pattern. Although there have been familial cases that suggest an autosomal dominant inheritance pattern, most cases are not familial suggesting a sporadic or degenerative disorder. This disorder is characterized by bilateral, symmetric, polygonal, cloudy gray stromal opacities separated by relatively clear zones in the central cornea. Patients usually present with asymmetric, nonprogress bilateral corneal opacities that is not visually significant.[1] Treatment is usually not indicated for CCDF.[2]

The most common risk factor for the development of CCDF is a family history of central cloudy dystrophy of François.

The characteristic pathologic finding of CCDF consisted of small cloudy polygonal opacities separated by clear zones in the central cornea. These opacities are larger and more numerous in the posterior stroma immediately anterior to the Descemet membrane and fade superficially (Kobayashi, Strachan). Pathologic findings include sawtooth folds in deep stromal collagen, and extracellular vacuoles containing mucopolysaccharide and lipid-like materials correlate with the location of stromal opacities.[4] The irregular pattern of the stromal collagen and the deposition of lipid extracellular lipid vacuoles in CCDF both interrupt the normally dense, parallel arrangements of the collagen in the corneal leading to clouding and opacities in effected areas.[4]

The pathophysiology of CCDF is widely unknown however the morphological findings on electron microscopy of the disease suggest that the opacification is due to the accumulation of mucopolysaccharides and lipids extracellularly and intracellular vacuoles in keratocytes.[4] This accumulation could theoretically interfere with the dense, regular pattern of keratocytes in a healthy cornea resulting in the characteristic clouding pattern.

No preventative methods have been studied.

Diagnosis of CCDF is accomplished through slit-lamp examination. Additional image modalities such as confocal microscopy and corneal transmission electron microscopy may help in the diagnostic process.

The central corneal opacities associated with CCDF are usually bilateral and symmetrical.[5] Unilateral presentation of CCDF has been documented but they are rare. The onset of CCDF is usually in the first decade of life, with the youngest affected patient being 8 years old.[3] CCDF is generally non-progressive and asymptomatic.

A thorough bilateral slit-lamp examination will show many small, polygonal, symmetric, gray stromal opacities with clear crack-like lines. These opacities are located centrally on the cornea and in the posterior half of the corneal stroma. Both corneas should demonstrate these opacities but there have been reports of unilateral CCDF.

Patients are usually asymptomatic, but sometimes corneal sensitivity and photophobia can occur. No systemic manifestations have been reported.

The clinical diagnosis is based on the finding of bilateral, small, polygonal, opacifications in only the central stroma on slit lamp and confocal microscopic examination. Family history may be obtained but may not always be contributory to the diagnosis.

CCDF can be diagnosed by imaging modalities like confocal microscopy and corneal transmission electron microscopy.

Posterior crocodile Shagreen (PCS) is a degenerative disorder of the cornea seen in elderly patients. The disorder is almost indistinguishable from CCDF and characterized by large, polygonal, gray lesions separated by relatively clear lines confined to the posterior two thirds of the cornea.[7] Like CCDF, the lesion in PCS is bilateral, asymptomatic, and non-progressive, in the central cornea.[8] CCDF and PSF differ by the fact that the uniform patches of cloudy stroma found in CCDF whereas patches of variable sizes are found in PCS.[9] Additionally, a positive family history can be used to differentiate between CCDF and PCS, as CCDF is sometimes genetic, and PCS is degenerative and never genetic.[7]

FCD is an autosomal dominant disorder characterized by multiple asymptomatic, non-progressive symmetric minute fleck opacities disseminated throughout the corneal stroma.[10] Like CCDF, one type of FCD consists of numerous small, oval, round, flecks that occur only in the central third of the cornea. However, unlike CCDF, another phenotype of FCD has flecks in both the central and peripheral stroma of the cornea.[10] In both CCDF and FCD the corneal opacities are denser in the posterior stroma of the cornea and less numerous in the anterior stroma. Both disorders are usually bilateral, but unilateral cases have been observed.[10]

Congenital stromal corneal dystrophy (CSCD) is a rare autosomal dominant stromal dystrophy.[3] Patients with CSCD presents with diffuse, bilateral corneal clouding with flake-like whitish opacities throughout the stroma.[3][12] Like CCDF, CSCD is usually non-progressive and spares the corneal epithelium and other layers of the cornea. However, patients with CSCD typically present with moderate to severe vision loss, while CCDF is usually asymptomatic and has no visual symptoms.[3] In addition, CSCD also presents with corneal thickening, which is not seen in CCDF.

Observation alone is indicated for patients with CCDF because the disorder is nonprogressive and does not threaten vision.[6]

In general, no treatment is required for CCDF because of its non-progressive and asymptomatic nature. The cornea of a patient with CCDF can be treated the same as a healthy cornea. In one case, a patient with CCDF received monovision LASIK surgery and achieved 20/20 vision 5 years postoperatively in the surgical eye without any exacerbation of the dystrophy.[13]

The prognosis of CCDF is particularly good because the lesions do not interfere with vision and are usually asymptomatic.[3]