It is an uncommon inherited dysmorphic syndrome, which primarily affect the soft tissues of the mid-face, with signs include:

Familial cases of the classic eyelid malformations have been described by Vignes and Ammon since the mid 1800s.[1]

BPES is a clinical syndrome that involves blepharophimosis, ptosis, epicanthus inversus, and telecanthus . 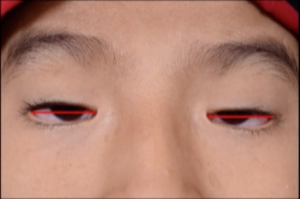 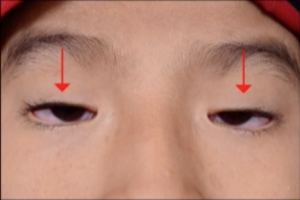 Epicanthus Inversus: Skin fold arising from the medial lower eyelid and ascending to the upper eyelid (see below). Epicanthus inversus has high specificity for BPES and occurs bilaterally. 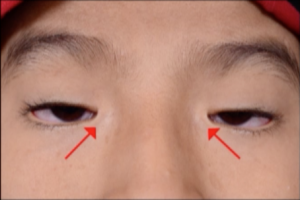 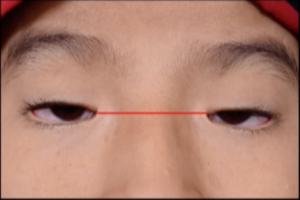 BPES is a genetic syndrome inherited in an autosomal dominant fashion. Up to fifty percent of cases are thought to be sporadic from de novo mutations in the FOXL2 gene.  BPES has an unknown prevalence.

The phenotype of BPES can be traced back to dysfunction or absence of the FOXL2 gene product.  FOXL2 is a single gene exon expressed in the mesenchyme of developing eyelids and ovaries. It is the only known gene directly implicated in the BPES phenotype. FOXL2 codes for a transcription factor that regulates the expression of various other genes, including those involved in inflammation, transcription, proteolysis, apoptosis, and detoxification of reactive oxygen species.[5]

FOXL2 expression can be altered by intragenic mutations, larger genomic deletions involving the FOXL2 gene, and even genomic alterations outside of the FOXL2 locus. Intragenic mutations account for about 72% of mutations in BPES and can manifest as nonsense, frameshift, missense, or in-frame mutations. Nonsense and frameshift mutations severely impair gene function, but the effect of missense mutations can vary. The location of the missense mutation plays a role in its pathogenic potential. Mutations in the forkhead domain, the region of the protein that binds to DNA, are likely to be pathogenic. In-frame mutations tend to manifest as poly-alanine expansions. These expansions are caused by slippage of DNA polymerase when duplicating trinucleotide repeats and account for about 31% of all intragenic mutations in BPES overall.[6][7] Large genomic deletions involving FOXL2 region account for about 10% of the genetic defects in BPES.[8] Genomic alterations in loci outside of the FOXL2 region have also been found to account for about 4% of the known genetic defects in BPES. These remote alterations affect the transcription of FOXL2 by impacting distant regulatory elements.

Patients with a pathologic FOXL2 variation nearly always express the BPES phenotype in the eyelids, while the effect on the ovary varies. The aforementioned poly-alanine expansions are more likely to be associated with BPES type two (without ovarian involvement), while truncated proteins are more likely to be associated with BPES type one (with ovarian involvement). Importantly, however, even some patients with poly-alanine expansions demonstrated some varying degrees of ovarian dysfunction. This could suggest an overlap between the two types of BPES, with the ovarian involvement being milder or later onset in type two.[9][10]  Clinical follow-up is therefore crucial for accurate evaluation of ovarian function. The role of FOXL2 in the pathogenesis of BPES is therefore well established, but further investigation is required to delineate a more precise relationship between genotype and phenotype.[6]

Mostly diagnosis is made by the clinical features which include:

BPES presents at birth with the four cardinal eyelid malformations: blepharophimosis, ptosis, epicanthus inversus, and telecanthus (See Figure  1). Other associations include euryblepharon (a type of lower lid ectropion), widened nasal bridge, superior orbital rim hypoplasia, hypertelorism, anteverted ears, short philtrum, and thick highly arched eyebrows. A retrospective analysis of BPES patients also identified amblyopia (in 41% of patients), refractive errors (34%), strabismus (20%), and nystagmus (6%). Of the patients with strabismus, 70% showed esotropia, 25% showed exotropia, and 5% showed hypertropia.[11] The premature ovarian failure in BPES type I presents as normal menarche followed by loss of menses before the age of forty. In addition to decreased fertility, this also causes other symptoms associated with hypoestrogenism including, but not limited to hot flashes, decreased libido, vaginal dryness, and reduced bone density. As this is autosomal dominant, patients may also report a family history of similar appearance, diagnosis, or premature ovarian failure.

Diagnosis of BPES is mainly clinical. Gene alterations in FOXL2 or cytogenetic rearrangements involving chromosome 3 can be identified using molecular genetic testing and chromosome analysis, respectively. This can be useful for genetic counseling and/or diagnostic confirmation. Female patients can also undergo laboratory evaluation of ovarian function with serum levels of FSH, LH, estradiol, and progesterone. Pelvic ultrasound may reveal a hypoplastic uterus.

Management of BPES should address the eyelid malformations, any related visual impairment, and primary ovarian insufficiency.

Prompt surgical correction of the eyelid malformations can help prevent visual impairment from amblyopia, but later surgeries allow for more precise ptosis correction.  For this reason, the exact timing of eyelid surgery is controversial. Once amblyopia has been ruled out, management of the eyelid malformations typically involves correcting the epicanthus inversus and telecanthus at three to five years of age, followed by ptosis correction one year later.  A medial canthoplasty is typically done to target the epicanthus inversus and telecanthus, and a lateral canthoplasty can widen the horizontal palpebral fissure and help correct the blepharophimosis. 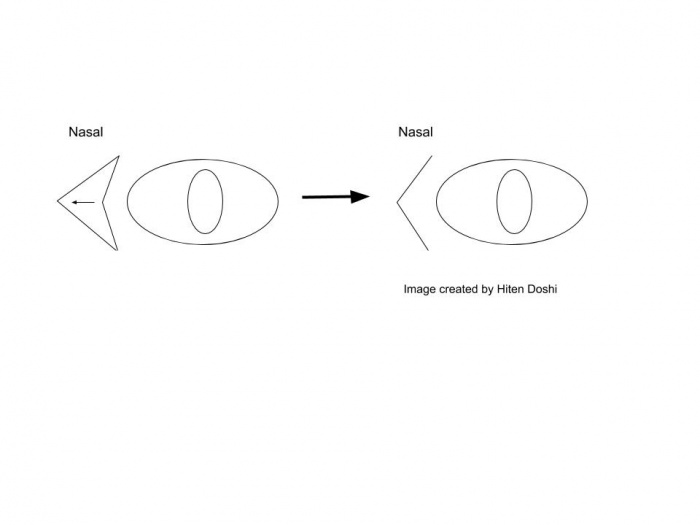 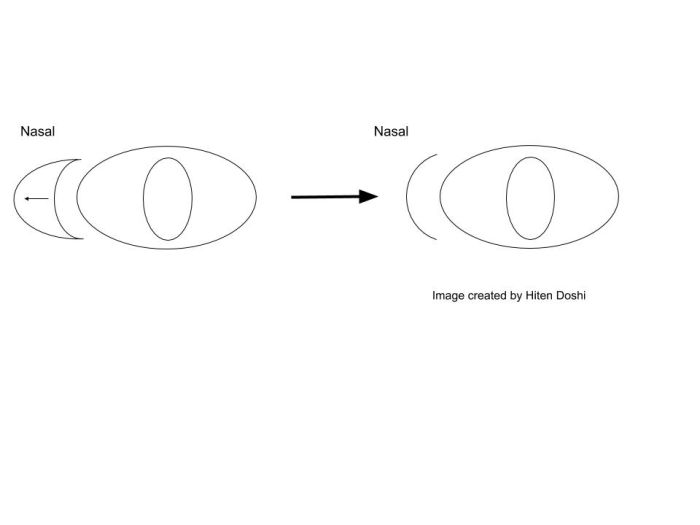 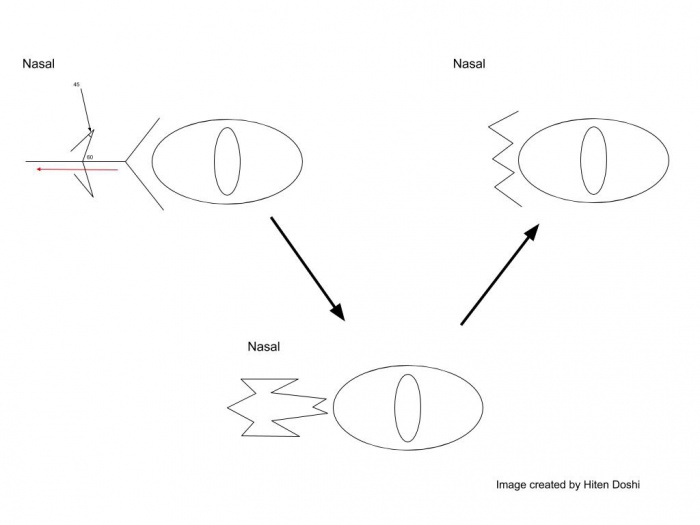 These are all viable options, but have been criticized for their postoperative scarring or, in the case of Mustarde’s technique, cumbersome mapping, measurements, and complexity.[12][13][14][15][16][17] A new surgical approach has been described that involves a modified skin redraping method. This method avoids undesirable scarring near the medial canthus by transferring tension from the medial canthus to the subciliary incision. While Mustarde’s technique has been previously popular, this new surgical technique could be a viable alternative with potentially better cosmetic outcomes.[12] Telecanthus can be corrected by shortening the medial canthal tendon and fixing it to subcutaneous tissue.[12] Transnasal wiring can also be used.[18]  An image demonstrating the modified skin redraping method is shown below, see the original publication for full details[12]: 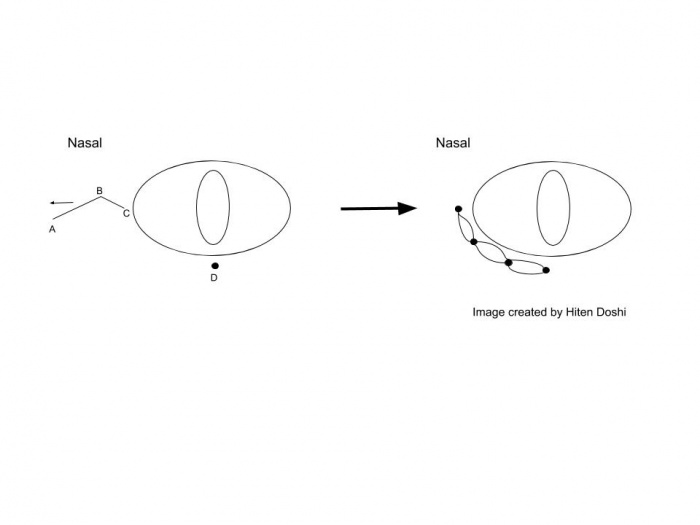 Ptosis in BPES has generally been corrected separately, and tends to be severe due to poor levator function. Frontal flap suspension has been used, but may result in underdevelopment of the frontalis muscle.[19] Supramaximal levator resection has been shown to result in both successful ptosis correction and improvement in levator function.[19]

Patients with BPES should also  undergo genetic evaluation and counseling. Females should be referred to an endocrinologist or gynecologist to assess for primary ovarian insufficiency. Premature ovarian insufficiency in BPES can be managed similarly to other etiologies; hormone replacement therapy can be used to manage symptoms of hypoestrogenism. This is especially useful in young patients to minimize post-menopausal symptoms and risk of osteoporosis. Patients with premature ovarian insufficiency, who desire children, should be counseled about their options including cryopreservation of ovarian tissue, oocyte donation, and adoption.[20]